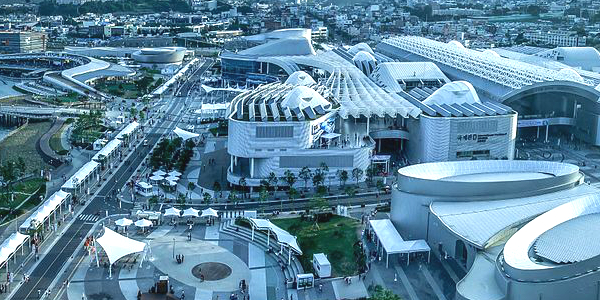 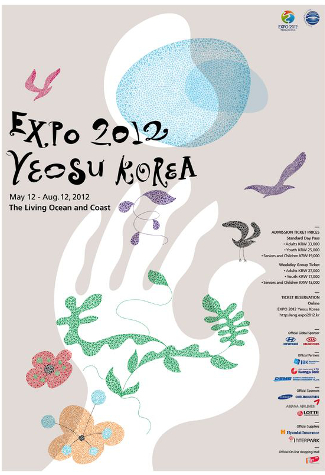 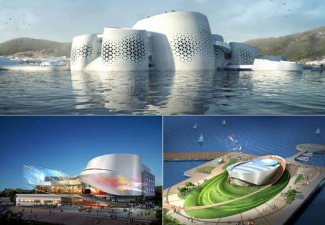 When South Korea bid for their second World's Fair and won, the Bureau of International Exposition already knew of its success at Taejon in Expo '93. After their loss to Shanghai for Expo 2010, it was no surprise that the BIE voted in November 2007 to award the southern city of Yeosu with the winning bid, 77 to 63 over Tangier, Morocco. And Yeosu proved, once again, that the South Korean nation could host the world well with a well conceived exposition with climate change and the oceans as its theme, drawing more than the estimated attendance of eight million visitors to the small, but elaborate site overlooking the Hallyeosudo Marine National Park and Odong Island in the port area of town.

More than one hundred international participants came to the three month exposition. The port area was refurbished. The visitors engaged in a vibrant discussion about the oceans, the coast, and how climate over the next century might change both. Nations, corporations, and twenty-three local governments participated in the expo from the Opening Ceremony on the night of May 11 until closing day. There were over 60 million visits to the various pavilions, a remarkable feat considering the size of the host city, 300,000 population, and the three month duration of the event. There was entertainment on the Floating Stage (320), at the Big-O (150), and others in the national pavilions (359). 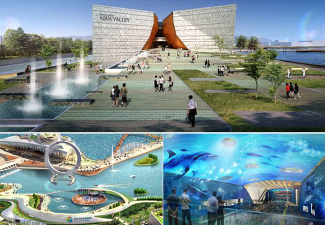 The Korean Government itself invested in a variety of pavilions, including the main Theme Pavilion, the Korea Pavilion, Climate and Environment, Marine Industry and Technology, Marine Life Pavilion, and the Marine Civilization and City Pavilion.

Much of the official hubub had to do with the variety of intellectual symposiums on the topic and the Yeosu Declaration, about how to best serve the oceans and coasts in the future. It's doubtful, however, that the average visitor saw the expo in quite those scientific terms, but rather in the fun plus information provided in the exhibits and entertainment.

Newspaper Reports
New York Times - Reported on June 8, 2012, "All Roads Lead to Yeosu." Article focused on the transformation of the small host city to the Expo site, including twenty-two new futuristic buildings, but less hotel rooms than desirable. 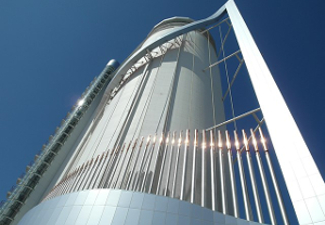 Note: It is sometimes difficult to tell whether certain nations actually participated in a significant way. Newspaper reports as well as the official guidebook may indicate participation when actual participation did not occur, or occurred minimally. Take the above as a guide, not gospel. Some news reports from the Expo Authority itself state that there were 104 nations and 10 international organizations, while that may or may not have included the host country.

Expo Tidbits
Over 4.6 million meals were served to Expo 2012 visitors.

The most popular attraction at Expo 2012 was the Aquarium with over 2.2 million visitors.

Legacies
The organizers had a specific plan to implement post-Expo use, including part of the site leased for twenty years to Korea Western Power as a solar farm and post-expo use of some of the main facilities as an Oceans Leisure Resort, including the Aquarium and Sky Tower. Today, 2017, the Big-O show remains, as well as the Hanhwa Aquarium, Sky Tower with cafe, and other restaurants and attractions.

Chairman of the Organizing Committee was Kang Dong-Suk.