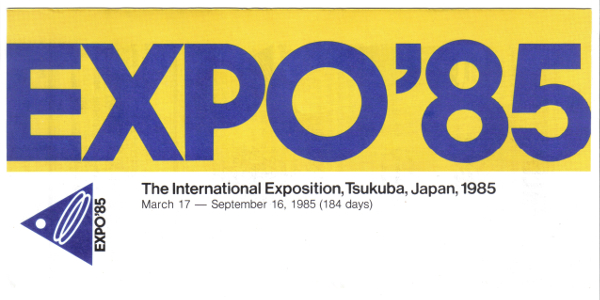 TSUKUBA, JAPAN 1985
Expo '85, Dwellings and Surroundings
- Science and Technology for Man at Home 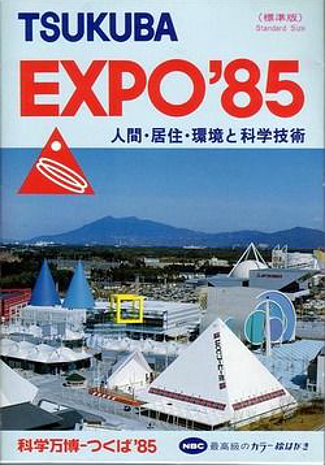 International Participants - 48 nations, including Japan, plus 37 international organizations in 9 pavilions. 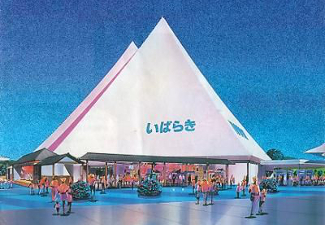 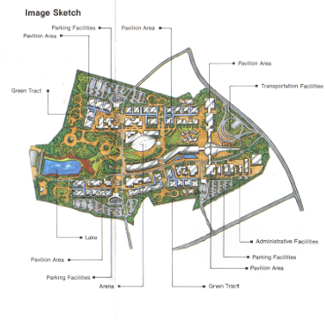 The area of Tsukuba had been a rural region thirty miles from Tokyo, but was in the midst of transforming itself into a science city with forty-five universities and research facilities popping up. In 1978, the Science and Technology Association announced plans for an expo. By 1979, they had informed the Bureau of International Exposition of their goal to host. Two years later, the expo was approved. Since Osaka had hosted Expo '70, with the Japanese economy emerging as an international power, the private and public sectors of Japan loved their expos that would show off their progress and technology. There had been the BIE sanctioned fair in Okinawa in 1975, plus other unofficial world's fairs and regional fairs such as Kobe in 1981. It was a nation of expos and they knew how to do them well.

Expo '85 would be no different. Corporate participants rose to the challenge, building large impressive structures. The nation of Japan, plus its domestic prefectures, came on board with little hesitation. Two thirds of site construction costs were born by government interests. Operating expenses would be born by admission and rental receipts.

The pavilions of the Japanese government were comprehensive. They built the Theme Pavilion called "My Land, My Life" with a glass symbol tower, Diversity of Land zone, Sun and Water Zone, and My Life area. The History Pavilion was a U shaped structure with exhibit halls for Technology and Independence, Iron and Rice, and Science and Its Fruits. The Children's Plaza, Expo Plaza, and Tsukuba Expo Center, which was outside the grounds and included an exhibition hall ad planetarium, would be permament. 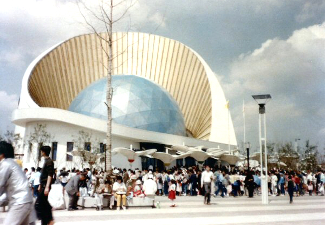 The exposition was considered a success, with over twenty million people in attendance, and had a stable financial structure due to its government backing. It was criticized, however, for its high-tech exhibits that some newspapers reported as unmemorable, that the wait lines were long, and that accommodations were far away. So much for an opinion. Concessionaires said they lost money. Others thought the Japanese pavilion was the best ever. Tsukuba wanted a fair to help promote its science business and place to reside. It had thought prior to the fair that 200,000 would live there, but only 30,000 did. Today, over 223,000 people are residents.

Jack Spoehr - "I certainly sensed from all the media and exposure through direct, personal visit a strong sense of popular, governmental pride. From what I could sense just visiting the expos, very good public word of mouth. Media always need to criticize something negatively - even if the collective subject is very good. There was some of this - although today I can't remember specifics. Overall media comment was positive. I should have seen the new themes at the nucleus of these respective expos - but I'm afraid I was focused on Imax's new technologies (introduced at each of them) - or on individual other pavilions - rather than a pervasive theme. To the extent that I was conscious of an overarching theme, they seemed popular in appeal. I suspect people focused on the attractions of individual pavilions - as I did."

Jim Ogul - "Tsukuba raised corporate participation to a new level. The corporate pavilions far outpaced the national pavilions. Taejon took corporate participation to a level exceeding Tsukuba. The rest were average in novelty. I think that the Asian culture interweaves government and business much more than Western cultures so the host governments strongly encourage private sector involvement and they get it. Private companies at Taejon and Tsukuba put up numerous $30 million plus pavilions. For many of these cities it was the first time for a major event of this magnitude. Some of the inexperienced cities did very well. I thought Tsukuba and Taejon did very well especially at handling very large crowds. Also the national days worked like clockwork. As an American with no language ability in either Japanese or Korean, the hosts made it almost as easy to deal with the issues of my job as being home in the States. Very enjoyable and interesting experience." 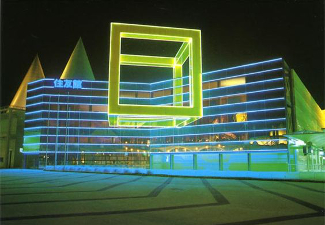 Transportation on the site included the Vista Liner (mini-monorail) - designed to move visitors from the North Gate to the center of site, the Sky Ride that provided transportation over Potchan Lake between Blocks A and F, and between the West and South gates. 2.88 million people used that. Pore-Pore Bus (Minibuses) and the HSST rounded out the major options.

Parade of 10 electric floats with other participants moved along main site twice daily, and parade participants presented shows three times a day at plazas throughout the site.

Number of participants was the largest ever for a special expo, comprising 47 foreign nations, 37 international organizations, 28 Japanese institutions, as well as the Japanese government. Impression of visitors, both Japan and foreign, was favorable. 62.1% of Japanese and 83.6% of foreign visitors replied that Expo '85 was very good or good.

The United States Pavilion had a $9.5 million budget with $5.8 million corporate donations on the theme, "Artificial Intelligence." It was 32,000 sq. ft. and drew 4.8 million people.

Legacies
Tsukuba Expo Center, 4 kilometers outside site grounds, remains as a science center and planetarium. The temporary pavilions were removed and site restored to its original state. 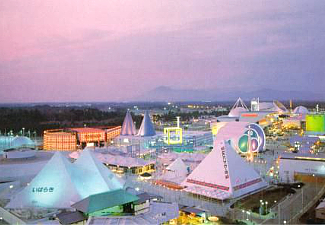 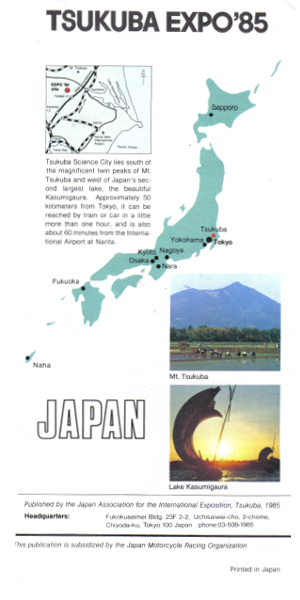