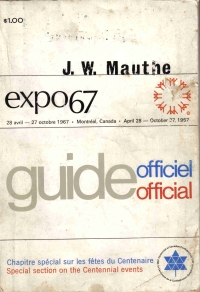 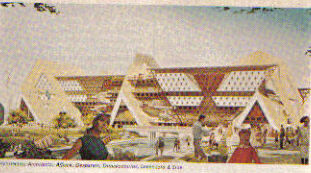 Fair Review Headlines
New York Times
"Pearson Lights Expo 67's Flame and a 'Monument to Man' is Opened."
"Crisp Sunny Weather Draws 120,000 Sightseers to the 1st Day of Expo"
"Pearson and Wife Ride in Minirail"
"A Sin City No More - Mayor Acclaims Montreal, the Home of Expo, as Great and Respectable"
"A Dome and a Box Compete at Fair - U.S. and Soviet Pavilions Among Big Attractions"
"Expo 67 Stamps Draw Collectors"
"The Boss at the Fair"
"Habitat: Exciting Concept, Flawed Execution"
"Crowds Surpass Expo Prediction"
"Demonstration Housing Unfettered by Tradition"
"The World on Display: Montreal Fair Outshines New York's in Some Respects, But Not All" 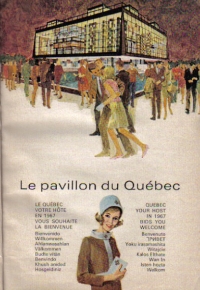 Expo Tidbits
17.6m cubic yards of fill used to create 297 acres of additional land around existing islands in the St. Lawrence River.
Expo-Express transit system carried 44 million people during exhibition.
There were 39 restaurants and 66 snack bars.
There were 800 employees in the Amusement Park.
Largest single day crowd of 530,000 on April 30.
30 day transit strike in late Sept. halted city buses and new Metro system and is said to have caused loss of a potential 5 million in attedance.
Expo 67 innovations, introduction of passport ticket. Canada's travel dollars reached a peak of $1.25 billion in 1967. Buckminster Fuller's gigantic geodesic dome structure that was the U.S. Pavilion, complete with a monorail running directly through it, was destroyed by fire on May 20, 1976.

Those in Charge
H.E. Pierre Dupuy (Ambassador & Commissioner General) in charge of international participation, World Festival of Performing Arts, fine arts exhibits and matteres of ceremony and protocol.
Robert F. Shaw, Deputy Commissioner-Genernal assisted the commissioner general and dealt with administrative problems, acted as chairman of the corporation's executive committee, at times the Board of Directors plus directed the corporation's business with the 3 gov'ts.
Andrew G. Kniewasser, General Manager, was responsible for the management of the corporation and directed the six departments.
Director of Finance and Administration, G. Dale Rediker, was in charge of finance systems and procedures, budgeting, etc.
Director of Installations, Colonel Edward Churchill. Director of Operations.
Philippe de Gaspe' Beaubien, responsible for operation of exhibition. Director of Exhibits.
Pierre de Bellefeuille, in charge of sales to exhibitors and sponsors in gov't and private sectors and laison between exhibitors and corporation.
Director of Public Relations and Promotion, Yves Jasmin.