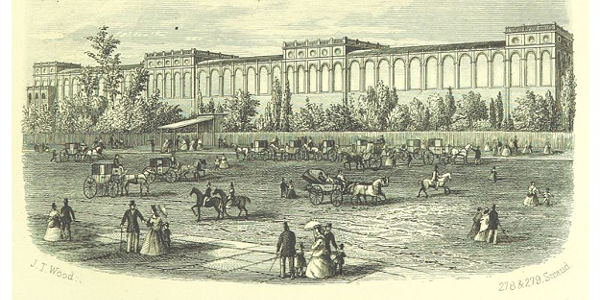 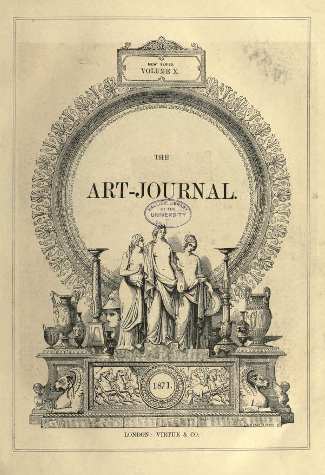 Exhibitions were not open on Sundays.

Site Acreage - 100 acres South Kensington behind Albert Hall. Some sources indicate that the acreage used, likely for the structures themselves, was between six and twelve acres.

Sanction and Type - Prior to the Bureau of International Exhibitions. London 1871-4 would be considered a Special Expo event on specific themes like that on the 2-3 or 7-8 years of a decade cycle.

Ticket Cost - 1871 - There were season ticket, as well as daily tickets costing 2 shilling 6d (Wednesday) and 1 shilling (other days). 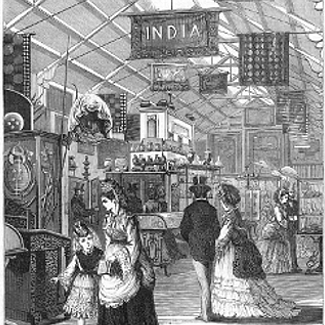 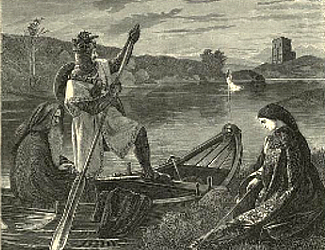 If you thought the 1862 London Exhibition was a downturn from the World's Fair in 1851, then the conception and execution of the series of small world's fairs held in London from 1871 to 1874 took that downturn to another level. It not only indicated the start of the diminishing capacity of Great Britain to think big, but the initial indication, or at least one of them, that the British Empire, still with its dominions, was about to embark on a one hundred year mission to drop from one of the preeminent nations on earth to the top of the second class. Without being too harsh, the International Exhibitions held in London during the third decade of world's fairs might as well have been a salvo ending the supremacy of Great Britain over the rest of the world. While Paris would host World's Fairs of large capacity until the beginning of World War II, which showed their own decline, Great Britain began to show its decline with these fairs.

It did not start out to indicate the above. Henry Cole, the man behind the 1851 fair, thought it would be a good idea to have smaller fairs that focused on specific subjects and dedicate them to the role of Prince Albert in the 1851 event. There was thought that the "greater exhibitions" had become tiresome. The Royal Commissioners of 1851 agreed to lend some of their land behind the new Albert Hall for the series, which was originally meant to last five years. Two brick halls were constructed east and west of the Horticultural Gardens. The public disliked the separation of buildings. The displays within the exhibition buildings were organized scientifically. The public hated that. The international exhibitors were displeased as well with its organization. The organizers thought entertainment and amusement were to be avoided. The public wanted more of that.

What started out as that small, but good idea, became a failure. Not all of it was the fault of design or small ideas. The Franco-Prussian War reared its historic fight. The Horticultural Society got mad and took away their gardens from the organizers; yes, you could still visit them, but there was an extra fee. They had competition from the large universal fair in Vienna in 1873. There was no rail connection and inconvenient restrooms.

The 1871 fair had broken even (some sources indicate a profit of up to L30,000, some say less), but by 1874, it was apparent that mounting losses and little interest from the public meant they would not have a fifth year. There was a loss overall of L150,000; it was paid by the Royal Commissioners of 1851. 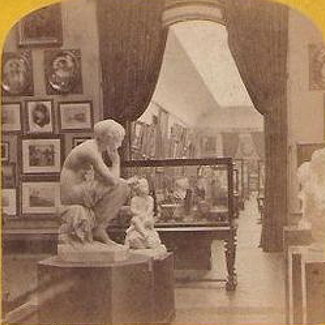 Thomas Prasch - "The London sequence features a steady decline in interest and level of national profile after the stellar debut of the Crystal Palace in 1851. The sequence of annual fairs with specific themes (1871-74) were particularly ill regarded in this sense; media coverage drops off substantially. 1871-4 can be considered as a group. Their significant contribution was a faile didead: Cole, concerned over the bigger-each-time tendencies of international exhibitions, sought to change the rules entirely: the annual fairs each were focused on a different branch of trade. The idea was to have ten categories and an annual rotation through the sequence. It was abandoned after the fourth year, and it was not imitated elsewhere. The themes for the S. Kensington fair all involve the developing program of Cole and his coricle for a reinvigoration of English design and a bridge between arts and technology. This was served by the development of the major museums at South Kensington (Victoria & Albert, museums of science, natural history, etc.) over the course of the quarter century after 1851. So the themes are designed very much for the English industrial context and fit very well. In the S. Kensington sequence, we again see here the declining popularity of the fairs themselves, especially accentuated by the shift to single-trade annual fairs in 1871. The 1871-74 sequence lost significant money and led to the firing of Cole himself from his position as head of the Schools of Design. In the London sequence, the funding for the first fair was by subscription and generally fairly secure, although cost overruns presented some problems in the rush toward completion. The profits of 1851 in turn finance later fairs,; funding only becomes problematic over the course of the 1871-74 sequence, because of major losses each year."

Peter Hoffenberg - "Later shows, whether private or not, tended to pale in comparison with the Crystal Palace and had to compete with many other sources of entertainment. Shows with focus, such as the Health and Colonial and Indian, often generated more interest than the general shows. Sometimes, such as the case at South Kensington in the 1870s, the authorities and press did their work, but folks were simply not particularly interested in attending. South Kensington shows suggested a particular focus for the displays, and this was new; rather than covering everything, each year would offer a selected group of exhibits. In the case of 1871, there are some who think that the Franco-Prussian War and the subsequent problems in Europe might have diminished the show's popularity. I don't know about that, except that the War made it less likely that French and German exhibitors and visitors could come to London." 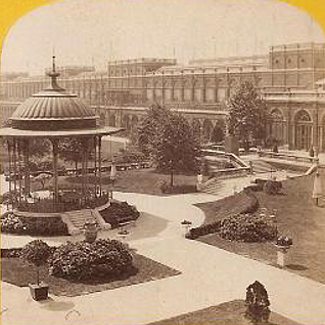 There may be some differences in the overall list here than were actually exhibiting at the exhibition. Some listed as having Imperial Commissions may not have technically exhibited. Various sources may indicate participation when participation did not occur. Use the above as a guide, not gospel. 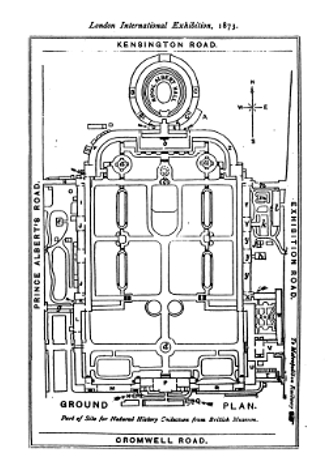 Decreasing amount of ceremony attended to exhibition every year contributed to financial decline. Prince of Wales and Princess Helena opened the exhibition in 1871 with a formal state ceremony. Part of the first opening ceremony was held in the Conservatory of the Royal Horticultural Society. In 1874, the fourth exhibition opened with no ceremony at all.

Products Exhibited in 1871 - Woollens, worsteds, and pottery, beside the annual Fine Arts, scientific invention and horticulture.

Legacies
The museums of South Kensington which were built both before and after 1871 should really be considered legacies of the 1851 exhibition, but are sometimes associated with the legacies of both 1851, 1862, and the 1871-4 series. 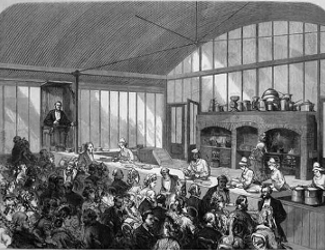