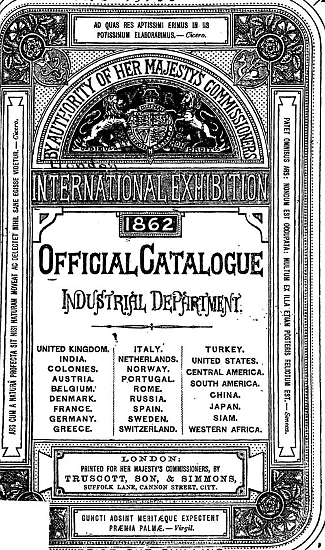 Site Acreage - 31.25 acres for total area (27.25 area for exhibitions). Building was built on site leased, rent free, by Royal Commissioners of 1851, on their South Kensington land where the Natural History and Science Museums now stand.

Sanction and Type - Prior to the Bureau of International Exhibitions. London 1862 would be considered a medium scale registered event today, similar to the events now held on the 5 cycle of a decade, although its size could refer to a Special Expo event like that on the 2-3 or 7-8 years of a decade cycle. 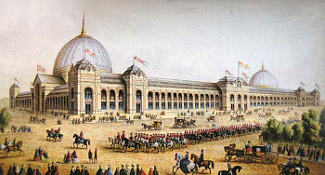 It wasn't as successful as its forerunner, the first World's Fair in 1851, but it was larger. There were 28,670 exhibitors. The fair building and site were fifty percent larger. The temporary building was 1200 feet x 560 feet and cost $2.15 million. While it didn't make money as the 1851 exhibition did, it only took a 11,000 pound gift from the contractors to clear the deficit and not call on the backers, government, or subscribers. Then why was the overall impression of the London International Exhibition of 1862 that it was the poor cousin of 1851? Well, mainly because it started to show, even this early on, that the preeminence of England as a world power was beginning to show its wear. After 1862, the subsequent fairs would focus on smaller pursuits, then on empire, then on holding onto empire. It was a downward spiral. So even though London 1862 actually was larger, it almost foreshadowed the smaller goals to come, the less than broad universal goals. Yes, a bit of a conumdrum. And the anticipated attendance, forecast at eleven million, didn't come close. Yes, it may have exceeded that of 1851 by a bit, but barely a bit, and England's reach was starting to overshoot its grasp.

There was no difficulty in providing funds or deciding to host the fair. Prince Albert wanted a second event to measure the progress of England and the world since 1851. That goal was achieved, even though his death before opening day would harm the fair by most accounts. The Royal Commission has been criticized for thinking post-fair instead of the fair itself, trying to decide how to spend a profit that did not come. The building was criticized as looking like a shed, too large for the site. However, the exhibits, particularly in the foreign section where Japan stood out, were praised. War was a prevalent theme with the Crimean and American Civil War causing tense relations with both France and the United States. The United States did participate, albeit in a small way. The summer weather was wet.

There would be a fine arts display, the first for an English fair. The Duke of Cambridge, Queen Victoria's cousin, opened the fair instead of the Queen. Technologial progress was on display; the Bessemer process and the calculating machine by Babbage, among others such as submarine cable, electric telegraph, plastic, and precision instruments. Progress was shown since the 1851 fair in the fact that the largest engine had increased for nine to thirty-five tons.

Above photo. Panoramic view of the London International Exhibition in South Kensington, 1862. Courtesy Wikipedia Commons. Below: Stereograph of the eastern nave of the London 1862 building, 1862, William England. Courtesy Library of Congress.

Thomas Prasch - "The London sequence features a steady decline in interest and level of national profile after the stellar debut of the Crystal Palace in 1851. 1862 an interesting anomaly: extensive coverage, but devoted often to problems rather than successes. The Exhibition Committee in 1862 may have in fact oversold the fair, with heavy activity in defense of the building design against critics. This may have backfired in public response. London 1862 suffers above all else by comparisons with 1851, almost always negative (bigger, but not better). Media accounts of London 1862 actually improve a bit after opening day. Despite the fair's poor reception generally, its contributions to the development of fairs was important. It establishes the decennial principle that will govern the rest of the S. Kensington exhibitions. It also bring in art for the first time in an English fair (following French precedents), and largely sets the terms for national schools of art that subsequent fairs would follow. And the principle that every fair should be bigger gets enshrined here as well. The themes for the S. Kensington fair all involve the developing program of Cole and his coricle for a reinvigoration of English design and a bridge between arts and technology. This was served (by) the development of the major museums at S. Kensington (Victoria & Albert, museums of science, natural history, etc.) over the course of the quarter century after 1851. So the themes are designed very much for the English industrial context and fit very well. Just prior tot he 1862 exhibition, Prince Albert died. This was significant both because of his central role as a promoter of the 1851 exhibition and because it plunged Queen Victoria into her deep widowhood. It meant, for example, that there were only empty chairs on the dais at the fair's opening. Also, the American Civil War severely limited American participation and somewhat restricted the participation of English textile makers, hit by the loss of Southern cotton. "

Peter Hoffenberg - "The first event seems to have the greatest national pride quotient, if I can coin a phrase. Thus, Sydney's International in 1879 was the first major Australian event and had more nationalist fervor around it than the following year's Melbourne International, ditto for London in 1862 which followed the "triumphant" Great Exhibition of 1851. 1862 broadened the scope of the exhibition, including, for example, more fine arts, not just industrial ones, and provided South Kensington as a precedent for building structures. The Crystal Palace was rarely repeated. Other innovations at other shows included imperial exhibits, liking shows with nationalists centennials, actually holding large shows in the colonies themselves, and incorporating regional connections, such as between Japan and Australia. The overall appeal in most cases was powerful. The only one I can think of (unforseen) most immediately is the sudden death of Prince Albert, which turned the 1862 London International into a de facto memorail to him. The sudden death of Prince Albert stands out among these events. His death forced Victoria out of the public light, but gave a boost to the event as a memorial to him." 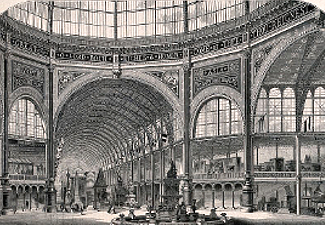 There may be some differences in the overall list here than were actually exhibiting at the exhibition. Some listed as having Imperial Commissions may not have technically exhibited. Various sources may indicate participation when participation did not occur. Use the above as a guide, not gospel.

There wer no sideshow attractions on the avenues leading to the fair, which the New York Times reported as of June 2. There had been those attractions in 1851.

Exhibition building, which was supposed to be permanent, was demolished after the fair, with material used for Alexandria Palace. The South Kensington site is now home to many museums, including the Natural History and Science Museum.

Five member Royal Commission, including Earl Granville, who was chairman of Her Majesty's Commissioners. Henry Cole was a consulting officer.