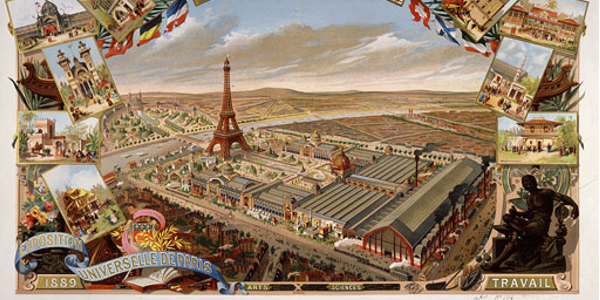 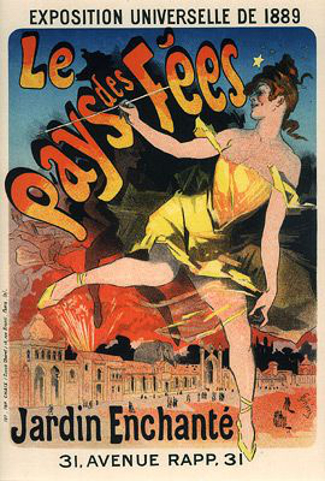 Site Acreage - 237 acres, of which 72 were covered with buildings. Location was the Champs de Mars and the banks of the Seine River.

Sanction and Type - Prior to the Bureau of International Exhibitions. Paris 1889 would be considered a large scale "Universal" registered event today.

Ticket Cost - 1 franc with many free visitors. Ticket book of 25 tickets, 25-30 francs. More than one ticket required some days. 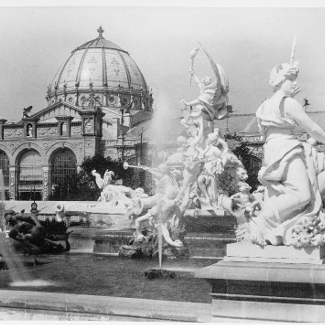 It was the Fourth Exposition Universelle held in Paris, starting with 1855 and each decade gracing the City of Light; 1867, 1878, and now, 1889. It was held to celebrate the 100th anniversary of the start of the French Revolution, decreed by Monsiuer le President Jules Gre'vy in 1884. This did not please other heads of state, including the British Monarchy, and resulted in more than a dozen unofficial foreign pavilions, including Great Britain, Russia, Germany, and Italy. They were afraid of violent demonstrations, which never occurred. Queen Victoria even recalled her ambassador. But the main thing remembered from this exposition was not who came officially or even how many exhibited. Over sixty thousand exhibitors came. It was the construction of the predominantly privately financed Eiffel Tower.

It was built by Gustave Eiffel with less than one quarter of its price ($6 million francs total) paid by the exposition. The income from the tower over the next twenty years would make Eiffel a rich man. Of course, many thought it as grotesque, overwhelming the better buildings of the city. But it lasted and turned him a profit by May. Over two million people paid to visit the Eiffel Tower during the fair. Since that day, well over one hundred million people have visited it.

Of course, there was much more to Paris 1889 than just a big tower that would attract tourists for over a century. Edison's telephone and phonograph were exhibited. There was a large colonial section with native villages. In the Liberal Arts Palace, there was a great Terrestial Globe. The Palais du Trocadero from 1878 had horticultural exhibits. Providing much amusement during day and night was electricity, which was used throughout an international exhibition for the first time.

Above photo. Palace Coutan and the Palace of Fine Arts. Below: View from the Eiffel Tower. Photos courtesy Wikipedia Commons. 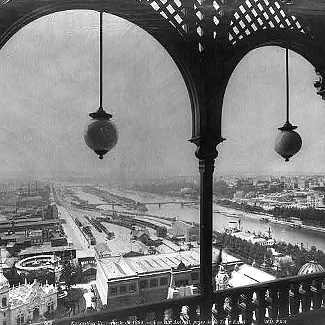 The New York Times hailed the event in their article of May 5, 1889, "Eve of the Big Paris Show" calling it "Far superior than any of its predecessors."

Many thought it surprising when the exposition turned a profit, but it did. And the protests didn't come, thought possible due to the celebratory French Revolution anniversary theme. The exposition was a source of national pride and with its exhibits of fine arts and technology, provided a success similar to the initial World's Fair in London 1851, and the previous Paris fair of 1867.

Historian Heloise Barbuy - "I think that the Fair of 1889 brought the dimension of the show into the world fairs. Contributing to this was the strategy adopted for avoiding excessive seriousness which had made the fair of 1878 tiresome, as well as the popular concept: "have fun teaching", without missing its reflective nature. The evening opening of the Fair, made possible by the advent of electricity, opened the way for the organization of "evening festivities". This was included in the context of a society characterized by several other forms of shows based on visual culture. In Paris, 1889, there was no official theme, no slogan. The World's Fair commemorated the centennial of the French Revolution and, therefore, the underlying theme was the scientific and industrial progress of the last 100 years. The city of Paris - post-Haussmann and still being reurbanized by the followers of Haussmann - was a modern capital, a model for reurbanization projects around the world. It showed it was able to host a Fair commemorating one hundred years of material progress, as its organizers hoped it would. The overall appeal of the Fair came from its modern connotations which, at that time, attracted most of the visitors." 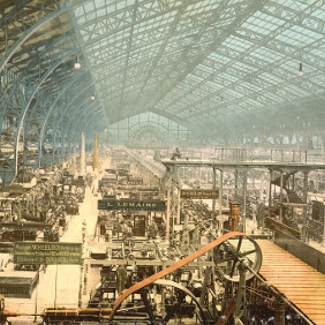 Expo Tidbits
One of four elevators built in the Eiffel Tower was by American Elisha Otis; the others were French.

U.S. garnered more medals than any other foreign nation.

A narrow guarge railroad ran around site, from monumental gate at Quay d'Orsay, running from 9 a.m. to midnight at interval of 10 minutes. 6,342,670 people used this during the fair.

Legacies
Eiffel Tower.
Palace for Fine Arts and that of Liberal Arts were to remain. 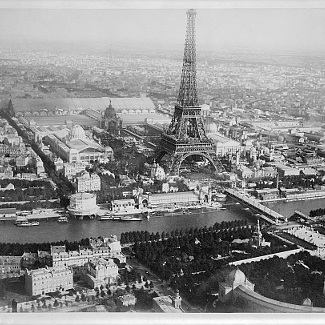 Organizers for the fair included Antonin Proust, minister of instruction & fine arts, who was named president of the exposition.