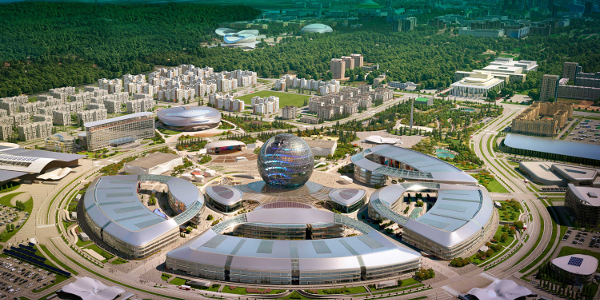 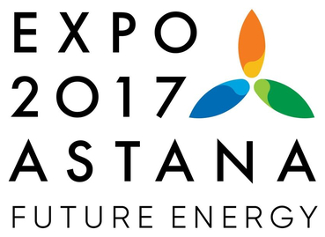 Sanction and Type - Sanctioned by the Bureau of International Exhibitions on November 22, 2012 as a Special scale Recognized Expo.


Other Histories of World's Fairs to Check Out 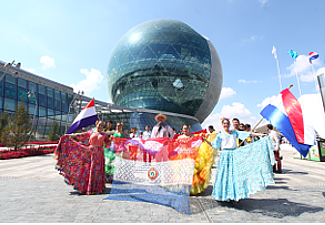 When the former Soviet Republic of Kazakhstan announced their intention to bid for the Special Expo of 2017, it came as a surprise to some. The small, by population not land, oil rich nation was basically announcing its attempt to jump into the world order, which it had already achieved by its independence and growing economy, but had not yet done on the larger world stage. They would have competition from a veteran nation in world's fair lexicon, from Liege, Belgium, a country that had hosted numerous events since 1885. The Bureau of International Expositions chose Astana on November 22, 2012 and the host city began preparations for the event five years in the future on the subject of "Future Energy," an applicable theme to the region. They expected two to three million visitors and got nearly four million. They expected one hundred nations and ten international organizations to participate; they got one hundred and fifteen nations and twenty-two organizations. The site was spectacular with the 80 meter high Nur Alem sphere drawing visitors to the center of the site, and the organizers achieved their numerical and subjective goals.

There were two theme pavilions on the Energy theme, the Museum of Future Energy, and a large Kazakhstan National Pavilion, five thousand square meters, at the base of the Nur Alem sphere. They attracted a large volume of sponsorships from international corporations, which spent 125 million Euros on their participation. There were over three thousand cultural events and twelve Future Energy Forums held throughout the fair run. 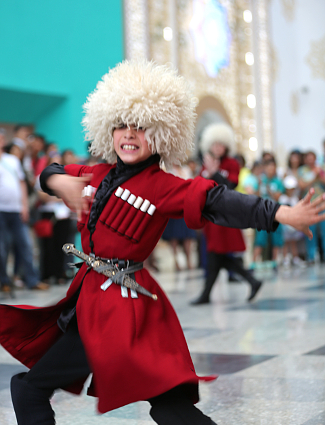 During the closing ceremonies, there was no doubt in the minds of the Kazakhstan government, including President Nazerbayev, that Expo 2017 was a success. They had achieved their goals. The first world's fair held in Central Asia, in a former Soviet Republic, had hosted the world well.

"In Kazakhstan, a World Expo Is All About Energy (and Dancing)" - The New York Times, August 23, 2017. Article juxtaposing the modernist Astana architecture with the small population of the nation, eighteen million, and fact that almost nobody in the United States knew that an Expo was being held. It praised the cultural performances and noted the difficulty of life under Soviet rule and today's benevolent, but somewhat unfree political climate, including 95% reelection rate of since independence in 1991 President Nazerbayev.

"5 Reasons To Visit EXPO 2017 Astana Now" - Forbes Magazine, June 9, 2017. Article recounts the first status of an expo in Central Asia, the sites to see in the city Astana, and the desire to discuss renewable energy.

"With World Expo 2017, Kazakhstan Tries Punching Above Its Weight" - Forbes Magazine, June 9, 2017. Focusing on Kazakhstan being the most forward country in this former Soviet sphere, calling in their "Best of Show." He describes the theme pavilion as Epcot like, at a cost of $3 billion and that the buzz around the event as a huge deal for the city and nation is apparent. 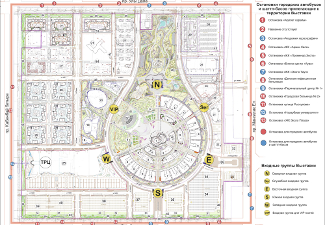 There was an amphitheater on the northwest corner of the site that could hold up to six thousand people.

Art was housed in the Astana Contemporary Art Center Pavilion.

Thirty restaurants were on site. Costs for a meal, at the Korean Pavilion the average was 8,000 tenge or $25.

Legacies
The Nur Alem sphere is expected to remain with a Museum of Future Energy, as well as on-site research and business firms, many associated with nearby Nazerbayev University. The Astana International Finance Center will also be located there. 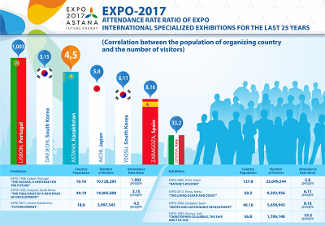