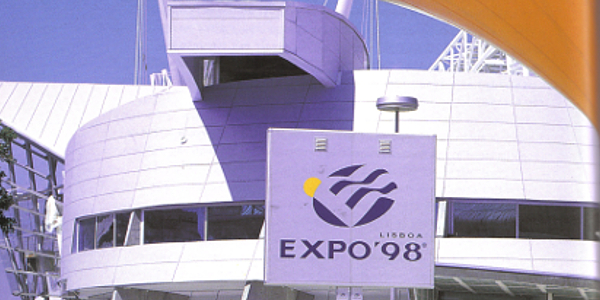 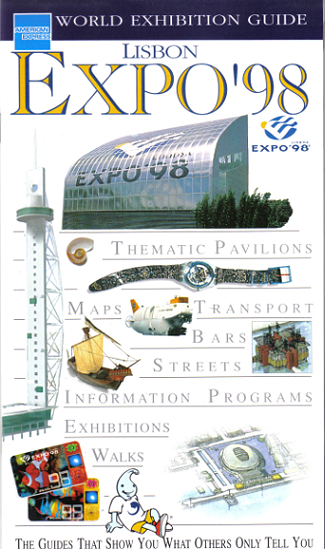 Total Cost - $699 million for Expo Authority with some additional expenses for construction, etc. in other budgets such as Parque Expo. Total, including participants, is estimated at $1,753 million to $2,398 million from various sources.

Sanction and Type - Sanctioned by the Bureau of International Exhibitions as a "small" Recognized Expo on June 23, 1992, winning bid over Toroto 23-18. Would be considered a Recognized event today like those on the 2-3, 7-8 years of the decade, but extension of months allowed and larger site harken to a hybrid expo on a larger scale than the "recognized" small theme expos today. 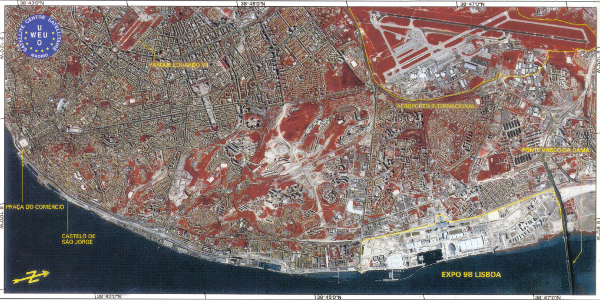 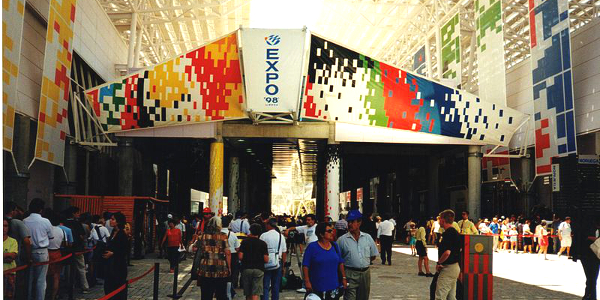 Expo '98 brought another fair to the Iberian Peninsula within the decade and hit the theme running, "The Ocean, a Heritage for the Future" corresponding for the first time with the International Year of the Oceans, as designated by UNO. It was also the 500th anniversary of Vasco de Gama's, the Portuguese explorer, trip to India. And they did a marvelous job with the theme. In theme pavilion after theme pavilion, the various topics of the ocean, from its history to its future, was discussed. Over one hundred and fifty nations and international organizations participated on the spectacular site along the River Tagus that had been reclaimed from a disused industrial site. That aspect, perhaps more than any other, was a marvelous achievement, particularly when put into context of post-expo use. The entire site has remained a popular legacy area to the city of Lisbon. Congratulations should be awarded to the expo authority for the foresight of that.

The city used the expo to push infrastructure improvement and get a new trade fair grounds, plus museums, after the fair was over. New transport lines, a new bridge over the river, and other projects were spurred by the exposition timeframe. On the site itself, there would be 13,500 trees planted, including 740 palms from around the world. 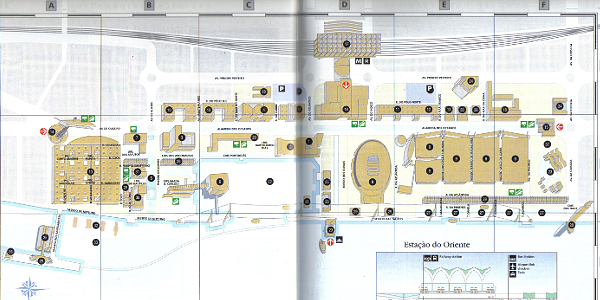 Six theme pavilions were built in permanent structures to be reused after expo. That is where the exposition shined.

The Oceans Pavilion - To function as the Lisbon Oceanarium after expo, includes five zones with its four corners representing four different habitats from around the world; coral reef from the Indian Ocean, rocky coasts of the Pacific, Antarctic, coast of the Azores in the Atlantic Ocean. 6,000 sq. Meters, 30 minute visit, 50,000 capacity per day.

Pavilion of the Future - Illustrates the importance of the oceans for man's survival. Five zones include, the Atlas Room, the Threatened Ocean, the Ocean Observatory, A Walk into the Deep Blue, and Towards the Future. 5500 sq. Meters, 60 minute visit, 20,000 capacity per day. Includes 3D show.

Portugal Pavilion - Shows the Portuguese contribution to the conquest of the Oceans, with highlight the animated film, "The Voyage." Exterior is the grand Ceremonial Plaza. 30 minute visit. 18,000 capacity per day.

Utopia Pavilion - Large oval buliding in shape of a mushroom with interior ribbing of wood recalling an inverted ship. Arena inside seats 12,000, for concerts 16,000. After expo to be the Multipurpose Pavilion of the City of Lisbon. During the expo it hosts the show, "Oceans and Utopias" four times per day. 27,760 sq. Meters, 30 minute visit, 40,000 capacity per day. The show tranports visitors into a world of dreams, fantasies, beliefs and utopias associated with the Oceans.

Virtual Reality Pavilion - Portugal Telecom sponsors this pavilion which recreates a voyage to the bottom of the oceans, a virtual Oceanica, and the lost city of Atlantis. There are two distinct areas; the Portugal Telecom Hall, 460 sq. Meters with visit of 25 minutes, and the Virtual Reality Hall, 1,000 sq. M with average visit of 36 minutes. Additional entrance fee charged. 5800 capacity per day.

The fair achieved a great deal of success on the theme, and drew a large international presence, in some ways due to the cancelling of Budapest's fair in 1996. It met its original target of ten million attendance, but not its extended target of fourteen million or pie in the sky hopes above twenty million. The fair was likely a bit too close in proximity and time to the large universal fair in Seville 1992 to draw the additional tourists and there was more concern by the expo authority about capacity than trying to generate attendance, according to some reports. Of course, the fair was not without its even more controversial subjects. On a money note, there were resignations and trouble with finances prior to the fair and a significant loss after. On the promotion side, the expected 40% visitation from Spain did not materialize and was blamed on the expo promotion department. On a lighter note, Russia contested the Vasca de Gama claim that the Portugal explorer discovered the sea route to India, stating that their man, Afanassi Nikitin, actually did it.

Nelson Barbuy - "At the end of the 20th century, the organization of national pavilions, which continues at the world fairs, are a redirected heritage, and I believe that their function can be seen quite differently, depending on the point of view of the organizers and of the visitors.

According to the organizers, in Lisbon '98, an attempted organization of national pavilions in alphabetical order ended up having to make many exceptions, in order to avoid placing countries next to each other, which were in conflict with each other, for example. Furthermore, ideology, probably associated with the need to hold costs down, made the pavilions practically look alike, except for a few.

As far as the public goes, it seems to me that these more typical pavilions are still the most interesting ones. I believe that if a graph were to be made, relating typical architectures with number of visitors, we would conclude that the old cliches and stereotypes are still the most attractive. However, this should not necessarily be binding on organized expositions. As I see it, we should look for new and contemporary solutions that are more attractive than the current look alike "hangars", but that avoid the stereotypes carrying over from the 19th century. I think that national images are still interesting, but, today, that interest is not tied to feelings of national pride. Rather, it is a growing interest in the cultural diversity that is threatened by globalization.

The theme of Expo '98 was: "The Oceans, a Heritage for the Future". The organizers established part of their references in the historic and cultural role of Portugal in the era of the navigators, in order to, then, highlight the ecological issue, regarding the oceans and water, in general, as the challenge we face today. Lisbon is the capital of a small nation, territorially, facing the Atlantic Ocean and with a long history on the seas. Its historic markers include the Tower of Belem, from where the navigators of other centuries landed and hauled anchor. The Oceans theme is, thus, very appropriate for the city. As for the ecological concerns, Lisbon must be seen not only as a Portuguese city, but also as a European city, because it is in that context that the country should develop Nature conservation programs. The general appeal of the theme was the idea of the Oceans, which is already associated with Portugal historically, geographically and touristically. However, the association between this theme and the idea of a World's Fair attracts a more restricted number of people." 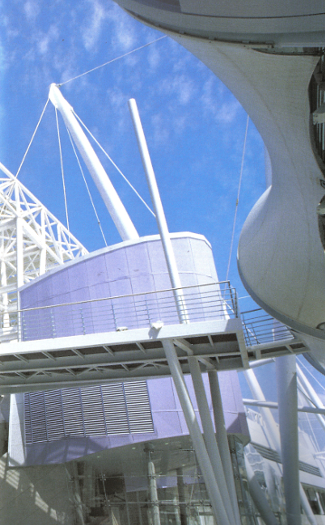 Note: It is sometimes difficult to tell whether certain nations actually participated in a significant way or whether they are listed as participants while being just part of international organizations. Newspaper reports as well as the official guidebook may indicate participation when actual participation did not occur, or occurred minimally. Take the above as a guide, not gospel.

Expo Tidbits
A report in the Portugal Electronic News one year before opening day told a story about the $107 million dollar investment in the Lisbon airport, increasing capacity to 12 million passengers per year from 6 million, and 30 planes per hour from the current 20, plus a disagreement on whether it could be completed by the exposition.

Vasco de Gama Tower had a restaurant at 85 meter height, a terrace at 100 meters, and three glass elevators carrying up to 25 persons.

Fair was formally opened by Portugal's President Jorge Sampaio, along with 12 other heads of state, including King Juan Carlos of Spain and President Fernando Henrique Cardoso of Brazil.

More than 100 eating establishments, including 22 restaurants affiliated with the participating pavilions, however, these are not located in the pavilions themselves but spread throughout the site. How much food was consumed? Meat (excluding poultry) 500.9 tons, Poultry 299 tons, Fish 139 tons, Seafood 54.9 tons, Dairy products 321.1 tons, Charcuterie 124 tons, Fruit and Vegetables 1464.4 tons, and Bread, pastries etc. 373.5 tons.

Legacies
In February 1999, the expo site reopened to visitors as the Park of the Nations, a free site with gardens, the Oceanarium, Virtual Reality pavilion (closed 2002 and demolished), and the observation tower. There was a shopping mall at the main entrance, the main buildings where the international pavilions were located was converted into the Lisbon International Trade Fair, the Utopia pavilion became Lisbon's main indoor arena (MEO), the Knowledge of the Seas Pavilion became a science museum, and the Future Pavilion became a casino. Today the site attracts 18 million visitors per year to its attractions and is home to offices and residents. 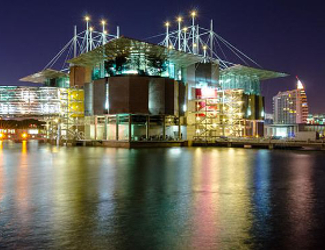