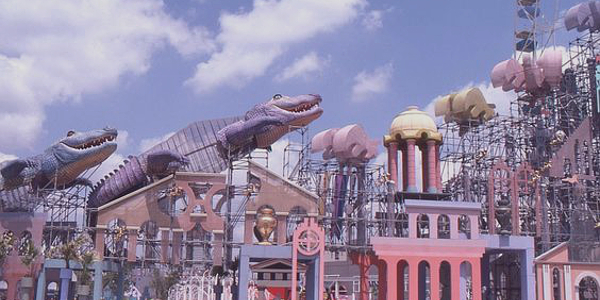 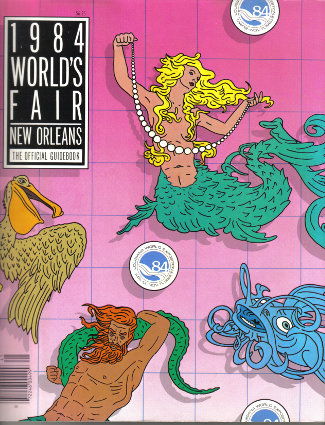 Total Cost - $207,651,000 with estimated total expenditure of $442.5 million of exhibitors, concessionaires, and construction of the New Orleans Convention Center.

Site Acreage - 84 acres along the Mississippi River in the warehouse section of New Orleans.

Sanction and Type - Sanctioned by the Bureau of International Exhibitions as a Special Category Expo. Would be considered a Special theme, Recognized Expo today like on the 2-3 or 7-8 years of the decade. 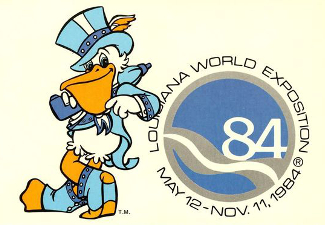 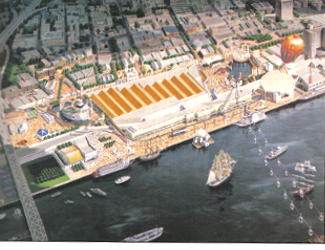 It's hard not to be frank about the outcome of the New Orleans World's Fair in 1984. It was poorly run, with organizers unprepared for negative press, or finishing the site by opening day, by keeping their mouths shut about whether the fair would go bankrupt before closing day (it did), or whether it would stay open through the official closing day. That's not way to run an expo. Besides that, and almost despite it, the Louisiana World Exposition was a bright, fun, and engaging exposition. If only the Expo Authority had known what it was doing on a financial side or publicity side, the bankruptcy and bad publicity that would lead to a three decade pull back of the United States from the World's Fair landscape, with subsequent withdrawal from the Bureau of International Exposition, would not have occurred. Yes, there were circumstances somewhat beyond their control. Epcot had just opened. The Knoxville World's Fair had only been two years before and close by. The 1984 Olympics was competition. However, none of those, in our opinion, were the reasons why the fair, which touted an estimated attendance two to three times bigger than what would come, failed to draw people at the rate it did. The organizers just got about everything wrong on the preparation side, and publicity side, except for the fair itself.

Okay, now on to the fair. It was bright and whimsical, in a location along the Mississippi River that harkened back to riverboat days, would revitalize the warehouse section of the city, and open up the river along Riverwalk, where the International pavilions were, for generations to come. You'd think that would denote a success story. In some ways it did. For those that made their way to the fair, they were immediately hit with a visual cacophony of well endowed mermaid and Zeus riding an Alligator, with a wonderwall of various shapes, sizes, and figurines that shouted water and New Orleans. The international pavilions were along that famous river, with nightly fireworks set to music. The Convention Center for New Orleans, built and used for the fair, would become a legacy, and housed the Louisiana Pavilion. There was Jazz. What would you expect. There was food and fun and international flare.

Above photo. Overview of the New Orleans World's Fair along the Mississippi River, 1984, Expo Authority. Middle: One of the many water sculptures at the fair, 1984, Official Photography Book of the World's Fair, Michael L. Osborne. 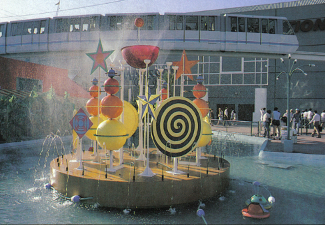 So, New Orleans was a success from an exhibit and fun standpoint, as experts point out, but there's no denying that the financial footing of the fair, in trouble from the start due to unrealistic attendance estimates, dampened the spirits and enthusiasm of potential guests. And that's why New Orleans, a much more spectacular location to host a fair than Knoxville, drew seven million visitors to their eleven. It doesn't help that when potential visitors called the info hotline, the customer service representative couldn't guarantee the fair would remain open until the end.

Historian/Participant Perspective Paul F. Stahls - Unique that it marked the centennial of another significant fair in the same city. The rivers/waters theme, in the ecology-conscious '80s was internationally significant, not contrived, and perfectly suited to the fair's Mississippi River-side location. U.S. and most international pavilions did a good job of playing to the theme. We knew, but didn’t mind that some banks would lose investments. Media picked up on that "news peg" and scared some folks away, but attendance was still fair to middlin'. There was an intial scramble for investment and support, and later defaulting on debts to ocnstruction entities and the life, but the fair was assembled and constructed on schedule and initial publicity about such things was not a negative factor. Please do no confuse the financial aspect of the fair with the question of its "success" from the standpoint of the pavilions and the visitors. 1984 offered all the pleasures and rewards that world’s fairs are intended to provide.

Leonard Levitan, Levitan Design - "The worst story of all demonstrating the dichotomy of attitudes between government and the general citizenry was the 1984 World’s Fair in New Orleans. The city and state foreclosed on their own loans to the exposition half way through its operations, thus bankrupting their own event! I guess it is possible to cut off your own head."

Pierre Kenyon - "Potential greater pride shot in the foot by organizational/financial problems, the limited ambition and scale of the project and the resulting bad publicity. Negative media publicity quite damaging, probably beyond what was deserved. Bankruptcy added to mountain of bad publicity and wounded pride." 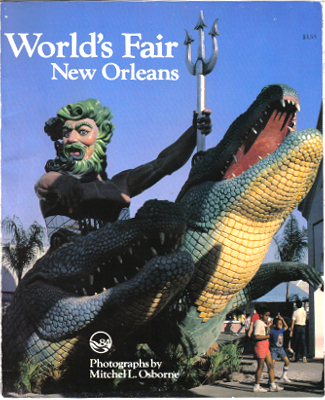 Corporate and Other Participants:

Note: It is sometimes difficult to tell whether certain nations actually participated in a significant way. Newspaper reports as well as the official guidebook or Expo Authority, which officially stated there were twenty-seven foreign exhibitors, may indicate participation when actual participation did not occur, or occurred minimally. Take the above as a guide, not gospel.

Monorail went through the Australia and Queensland pavilion.

The stage performances of the entertainment program were held at the Queensland Performing Arts Centre, which was adjacent to the site.

World Expo Park: Amusement zone was open 10 a.m. to 10 p.m. with entry included in Expo price. There were three rollercoasters, a mock space ship Orbitron, and other attractions.

Legacies
There were great intention for the post legacy expo site. The winning bid for post-Expo development went to River City 2000, who were to begin a six year A$1b project with two hotels, world trade center, low-rise offices, "space science" center, amphitheater, exhibition and convention center, commercial space, residential and retail accomodations. There was also to be parkland. Today the site is home to South Bank Parklands with the only remaining structure the Nepal Peace Pagoda. Two of the entertainment venues, Riverstage and Courier Mail (Suncorp) Piazza remain in some form in the parklands. The World Expo Park amusement park continued for one year, but was closed. It now is the site of the Queensland Convention and Exhibition Centre. 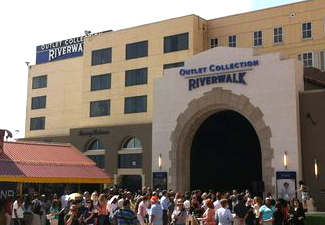