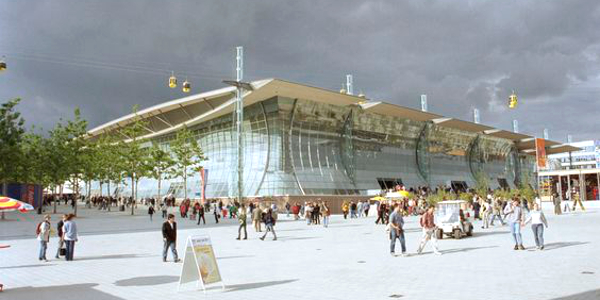 Sanction and Type - Sanctioned by the Bureau of International Exhibitions as a Universal scale Registered Expo. 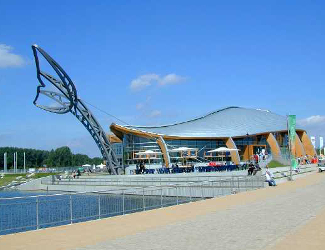 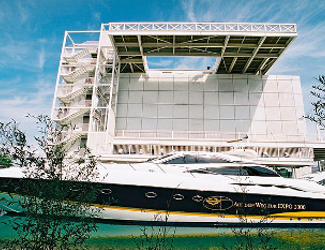 There's no getting around it. Hannover's Expo 2000 may have been the most disappointing world's fair in history. Now, that does not mean that the exhibits and participants were not worthy of the title. However, after a variety of missteps by the Expo Authority, including attendance estimates more than double the eventual attendance (40 million versus 18.1 million), the choice of a rather tired old trade fair site as the location, and day to day planning decisions that would mar attendance at most turns, the overall impression of the Hannover World's Fair was less than stellar, and yes, disappointing. And that's not even to get into the lack of a United States pavilion, and the reneged promise by President Clinton to participate. That was the first time in World's Fair history since 1851 that the United States did not participate in a major world expo. That lack can not be claimed as the main reason for the failures at Hannover, but it sure did not help.

When Hannover won the right to host the fair over Toronto on June 14, 1990 by one vote (they should have won), there was great hope that the first major world expo in the reunited Germany would be a success. Germany had not been a major player in hosting world's fairs. They'd spent the first several decades of expo history participating as the Zollverein, a quasi trade collection of principalities and kingdoms loosely tied together prior to German unification in 1871. The first half of the 20th century was spent trying to take over the world, not cooperate with it. After World War II, Germany played host to an official world expo of the smaller variety in Munich 1965. But, for the most part, this was their coming out to the world expo community. Hannover 2000 was it!

But trouble started almost immediately with the selection of the Hannover Trade Fair grounds as its site. While assisting in keeping costs down, the flat blocky buildings did not lend to the atmosphere that most Universal fairs enlisted, despite some marvelous additions surrounding those buildings in the vibrant national pavilions that were built. The attendance estimates that proved double the actual lent to continued news reports of failure; making you book your parking spot weeks in advance was just one of the Expo Authority decisions that kept attendance down. "Beautiful day, honey. Why don't we go to the fair. Oh, we can't go today. We had to book the parking spot last month!" Add in no season tickets and a fear of too many on site and you had a recipe for a souffle that was going to have trouble staying high. In the end, the reported deficit was DM 2.4 billion. The Expo Authority put a good spin on that number, however, but claiming that tax revenues in Germany were expanded by DM 2.7 billion because of it. Maybe. Maybe not. 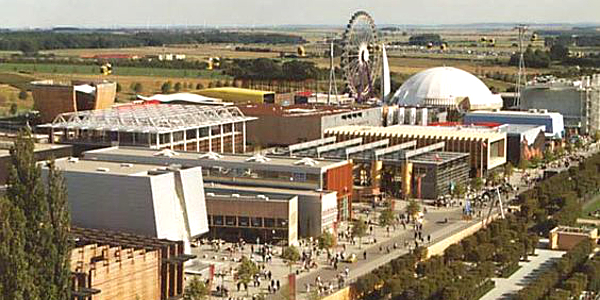 But let's get away from what it was not, to what it was. International participation was high with national pavilions either in the old trade fair buildings or in temporary (18 nations in the West Pavilion Site) or permanent (30 nations in the East Pavilion Site) buildings with extremely unique architecture that buoyed the look of the fair. The cultural events at Expo 2000 were aplenty; 15,000 events with 300,000 artists. The average visitor saw five cultural events during their visit, including the Water and Light Show that was seen by over 4.5 million. Other exhibits included the Bertelsmann Planet Pavilion, BMW World, the Global House, and the ZERI Pavilion that was the largest bamboo structure in the world.

Lisa Bresnehan - "Germany's National Pride is world-renowned, however has it has taken a bit of a beating this Expo due to unrealistic visitation projections (40 million over 5 months) - they have finally acknowledged after 1.5 months into Expo that a lot of their expectations were unrealistic. Unfortunately, again, there was much negative publicity based around the lack of visitation numbers on opening day and throughout opening week. There has also been ongoing criticism for the ineffective publicity campaign the Expo authorities used. I think this Expo has been disappointing from the new innovations angle. Granted, there has been greater use of multi-media, but nothing that has really been outstanding. I think the Brisbane Expo in 1988 (to which I was only a visitor) was much more innovative and exciting to the senses. It is a shame that the Expo Authorities did not use their publicity/advertising campaign in a way to arouse local pride in the citizens of Hannover - people in Hannover in the main see Expo as a negative force, designed to make them open their local businesses longer hours, etc. When you talk to local Hannoveranas in the pub or wherever, they focus on the lack of visitors as confirming their original idea that Expo was a waste of their money, as well as the high cost of entry (DM 69 per adult per day - they do not have a 'season pass'). There have been many quite strong anti-Expo and anti-capitalism protests in the city of Hannover, however these seem to have died down."

Heloise Barbuy - "At the end of the 20th century, the organization of national pavilions, which continues at the world fairs, are a redirected heritage, and I believe that their function can be seen quite differently, depending on the point of view of the organizers and of the visitors. Also, at Hanover 2000, there was a tendency to make them look alike, even though there were a good number of pavilions with "typical architecture", especially from Asian countries. The Hanover Fair was a little more publicized in Sao Paulo and there was a certain air of expectation - although not very wide ranging - because Brazil invested a considerable amount in its pavilion and because the German organizers included Sao Paulo among the four cities covered in the "Century 21" pavilion.

"As for Lisbon '98 and Hanover 2000, I don't think that they presented no essentially innovative concept. But I believe that the Hanover Fair was different from more recent ones, precisely because recovered the 19th century expositions focus. Like the former fairs, it sought the ideal formula for the "human-nature-technology" triad, but adding an emphasis on the needs of environmental balance, social justice, and subjective human needs. Since 1914, when World War I broke out, faith was lost in the ideology of progress, and placing the blame for these events on industry was abandoned. From then on, the Fairs tended to have a more directly cultural approach (see Schroeder-Gudehus & Rasmussen, 1992). Although they have continued to be promoted and supported by commercial and industrial organizations, the presence of these sectors has been gradually less in evidence, and they have participated more as sponsors that invest in their image than as the intellectual force behind the Fairs. For 2000, a conglomerate of German companies simply took over, conceived and proposed, via an enormous world's fair, a way of managing the world, based on the idea of sustainable development. Regarding Hanover 2000, it seems to me that the theme "Man, Nature, Technology" is appropriate for Germany, but maybe not specifically for the city of Hanover. Germany is one of the main hubs for technological development in the world, but Hanover is essentially a services city. I think that the aim of the theme was not very clear. In order to understand the perspective of the organizers, connected with sustainable development, one needed to read more explanations. Perhaps, something like "Society, technological development and ecology" would have been more effective."

Ted Allan, President BIE - "Toronto should have had this expo, but diplomatic concentration on reunification of Germany triumphed. Dull, huge, trade fair site unsympathetic to visitors. Good theme building largely ignored. Media attacks and desire by countries to reduce costs at a time of economic depression, and Federal desire to leave it to the city and region made for a failure financially and low visit totals. High costs to exhibitor renting space. USA stayed away - a dramatic move which prompted doubt about future of the medium." 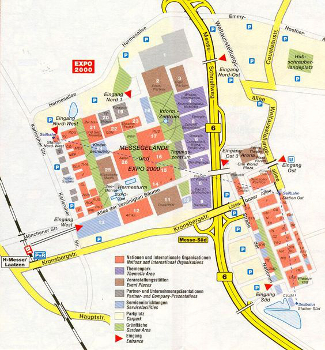 Final report of Expo 2000 admitted that there was a poor initial plan with sluggish advance ticket sales and weak start for Expo 2000. Changes to ticket plan adopted to encourage sales; i.e. no more surcharge for walk up visitors, lower evening ticket prices, no parking fee.

German Pavilion had more than 5 million visitors (42,100 visitors per day in October). Most frequently visited of National Pavilions. German pavilion included exhibits from all sixteen states of Germany. There were sixteen state weeks, four theme festival weeks and total of eight series. The cost of German Pavilion was DM 280 million.

Transportation: Early on there was only 5-6,000 cars per day parking on site, at end 50,000 after no reservations and free policy enacted.

It is reported that 6% of visitors came from overseas. 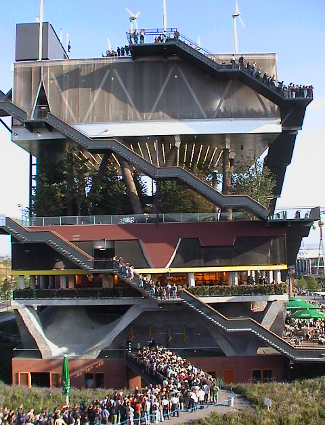 Legacies
After the fair it was planned for seven pavilions to remain in the East Pavilion Site (Belgium, China (Chinese Therapy and Contact Centre), France (Decathlon Sports manufacturer), Denmark, Finland (Finland Communications Network), Sweden, and UK) all part of trading park. The original Hannover trade fair grounds remain and still host trade fairs. The expanded area around the Expo Plaza is now home to Hannover's centre of information, technology, design, and the arts. Most of the national pavilions were demolished, but more than a few remain, including the Netherlands Pavilion, which is in disrepair. As of 2017, the Spanish, Denmark, Hungary, China, Netherlands, Poland, Norway, Turkey, Great Britain, Sweden, Belgium, Yemen, Lithuania, Finland, Czech Republic, and French pavilions remained. Some were still for sale. 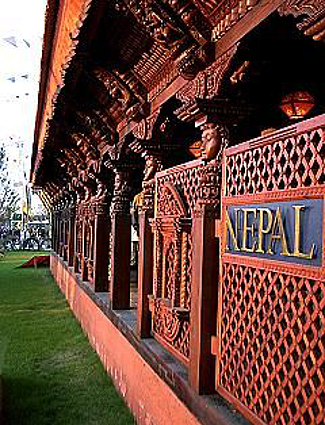