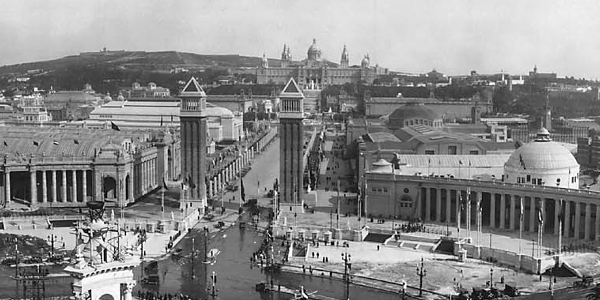 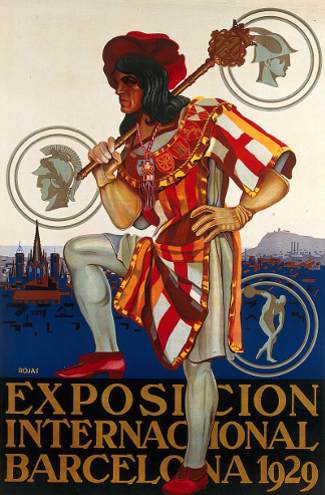 Sanction and Type - Prior to sanctioning by the Bureau of International Expositions. Would be considered a Special (Registered) Expo today like those on the 5 year of the decade. 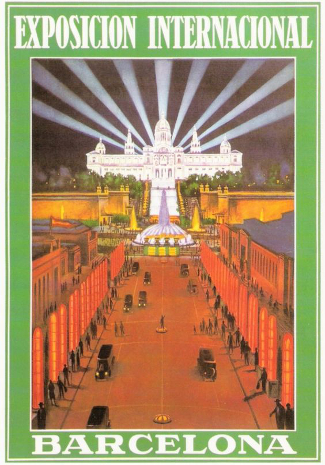 Yes, the larger twin to the Seville Ibero-American, the Barclona Exposition was held on the impressive hillside site of Montjuic with one thousand seven hundred and fourteen exhibitors and one hundred and twenty-nine thousand exhibits. Its symbol, the National Palace, had an exhibition of Spanish Art. There was a Spanish Village, German pavilion, which remains, reconstructed in 1979, by Mies van de Rohe, and drew significantly more visitors than its Seville counterpart. Officially its theme focused on industry, Spanish art, and sport. Barcelona was an experienced expo city, having hosted a previous World's Fair in 1888.

While the Seville event focused on the Iberian peninsula's relationship with its former colonies in the Americas, Barcelona tilted toward commerce and industry of the entire world. Fourteen European nations exhibited. Humongous water displays splashed their way about the site. There was a sports stadium that could seat sixty thousand and would host the world again in the 1992 Summer Olympic Games. It was a hilly site. The mountain railway became a necessary and well used mode of tranporation taking visitors from the main gate at the bottom to the third zone at the top. 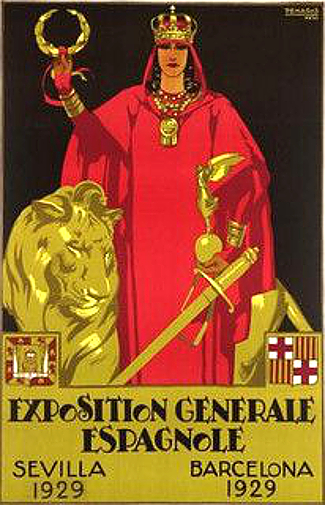 The buildings were spectacular with the National Palace, its largest, dedicated to culture. There was a Festival Hall which had a capacity of twenty thousand. The Spanish Village, one of the most popular exhibits at the fair, was twenty thousand square meters in size and contained replicas of over three hundred structures. The Fine Arts Museum was a remnant of the 1888 Barcelona Exposition. Other structures emblematic to the city were also constructed; Palau Nacional de Catalunya, the Montjuic Magic Fountain, the Teatre Grec, and the Poble Espanyol.

The Barcelona exposition gets more praise than its counterpart, with both gaining remarkable legacy structures and improvements in their cities. However, the fair itself was not particularly successful. There were press complaints of hotel price gouging in the city, some double their cost. Other reports note a Spanish deficit of 140 million pesetas, likely not all from the fair, however, but possible. It was hurt by the New York Stock Market crash and in the end, Primo de Rivera and the Barcelona Mayor, Baron de Vivar, would resign.


Prior to BIE Sanction

Note: It is sometimes difficult to tell whether certain nations actually participated in a significant way. It is said that twenty of the European nations had official displays with others represented by private exhibitors. The Bureau of International Expositions states that there were 29 international participants. Take the above as a guide, not gospel.

There were theme pavilions including the Decorative Arts, Graphic Arts, Communications and Transports, Construction Industry, Electricity, Alphonse XIII, Sports, Cinema and Photography, Textile Arts, Travel, and five pavilions on the topic of Agriculture. There were ten pavilions dedicated to Spain.

The exhibition buildings had 1,183,000 square meters of space.

After the Barcelona fair closed as an international exposition on January 15, it remained open as a National Exposition for six months.

Legacies
Montjuic remains with structures from the fair including the Olympic Stadium and reconstructed German pavilion. The Spanish Village is still there, the only remaining village from a past world's fair. Palau Nacional de Catalunya, the Montjuic Magic Fountain, Palace of Graphic Arts, Palace of Agriculture, and the Teatre Grec also remain as well as the Pavilion of the Barcelona Bank Savings and Pensions and the Pavilion of the Compania General de Tabacos de Filipinas. Other expo structures also remain changed to new uses. 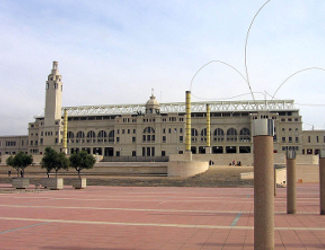