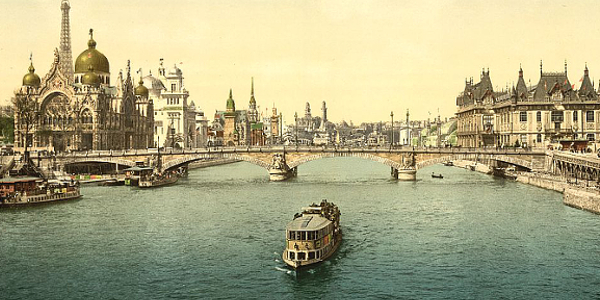 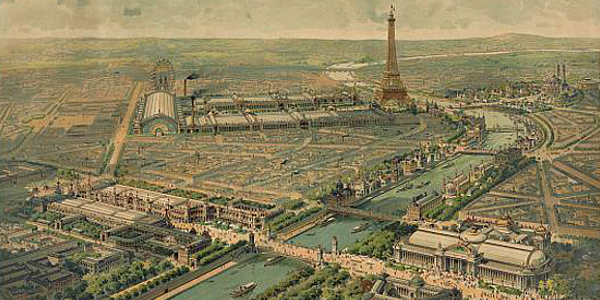 Sanction and Type - Prior to the Bureau of International Exhibitions. Paris 1900 would be considered a Universal scale registered event today. 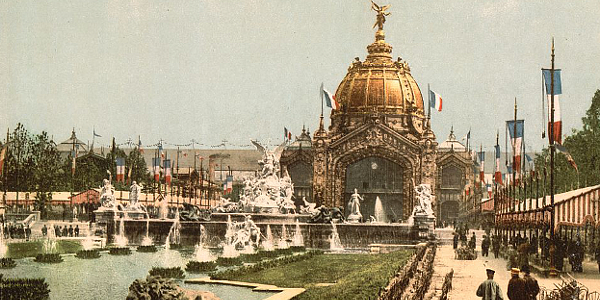 The fifth Universelle Exposition held in Paris, with planning starting in 1892 to celebrate the 19th century. Paris chose the date fueled by rumors that Kaiser Wilhelm and Berlin were planning a fair for 1900, and the rivalry in all matters, both diplomatic, militarily, and in such things as fairs had been raging between the two nations for years and would continue through World War II when the fair site was overtaken by German tanks. The Germans did come and exhibit. It was held on the traditional site, with expanded acreage on both sides of the Seine, plus an additional annex location in Vincennes where the twinned Olympic Games were held. Yes, the Olympic Games were held as a second cousin to a World's Fair, something today we would not think possible. It was larger than the past Paris fairs, including one hundred and eleven covered acres in exhibit buildings and eighty-three thousand exhibitors.

New buildings were built and the Trocadero Palace as well as the Eiffel Tower remained as structures on the grounds. There was controversy over the placement of the United States, which originally was not put in a position as a world power; in the end, it was squeezed between Austria and Turkey.

Overall, the buildings, built in two styles, traditionalist and Art Nouveau, were sometimes criticized. One hundred and seventy-five pavilions and thirty-six national pavilions were located in a double row of the Quai d' Orsay. There were significant firsts shown at the fair, including the display of x-ray machines, of wireless telegraphy, of automated food service and sound-synchronized movies. There was a large area for automotive exhibits and a section devoted to flying machines.

Above photo. Another view of the Paris 1900 exposition, 1900. Below: View of the Tracadero at the 1900 fair, built for the 1878 universelle exposition. Photos courtesy Library of Congress. 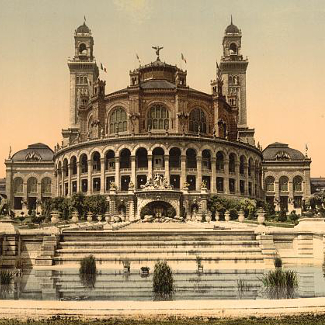 Electricity provided much interest and invention. The program of light and water on Chateau d'Eau drew crowds every night. The modern Olympic Games came to the Vincennes annex; the first time a city outside Greece hosted them.

The exposition lost money and fell short of the overestimated prediction of one hundred million attendance. That didn't please some concessionaires, athough it was odd that such a prediction was made in the first place, as no fair had come close to that figure in the past and still has not. There were high organizational and running costs. It was estimated to cost a visitor six hundred francs to see all commercial attractions. Rents to lease were very high. Many concessionaires had financial difficulties, threatened to strike, and eventually received a partial refund on rents. The public was said to be disappointed overall, thinking after the fair had closed that the future of France did not see themselves as hosting additional fairs as its power on the world stage waned.

Aram Yengoyan - "Paris, much of the Press after its closure attacked the fair and the idea of the fair. This came from the right and the left in France, and many in the Press felt that it should never be done, one reason is that the invited nations for a variety of different reasons made France and the French look mildly inadequate at best. Both Paris and St. Louis (1904) expressed the colonial system, the St. Louis fair had a lot in regards to the colonial possessions and also the ability to Americanize the world. Paris played the glory of France/French culture in terms of globalization." 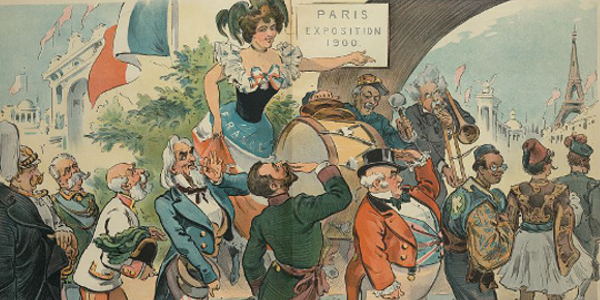 Accepted but did not come - Bolivia, Costa-Rica, Domincan Republic.

Expo Tidbits
Sousa Band represented the United States on July 4 for the unveiling of the statue of Lafayette presented to the French on behalf of the children of the USA. He wrote "Hail to the Spirit of Liberty."

Inside site, the Trottier Roulant, moving sidewalk at two speeds with a stationary third platform, cost 50 centimes, for route between Champ de Mars and Esplanade des Invalides. Receipts did not cover costs.

Legacies
Three permanant structures were erected; the Grand Palais, the Petit Palais, which became the Paris Museum of Fine Arts, and the ornate Alexander III Bridge, which linked the Champs de Elysees with the Esplanade des Invalides. 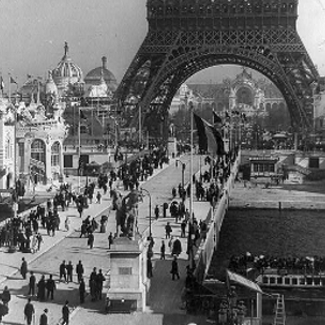