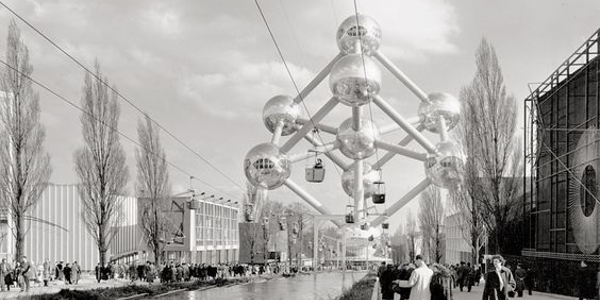 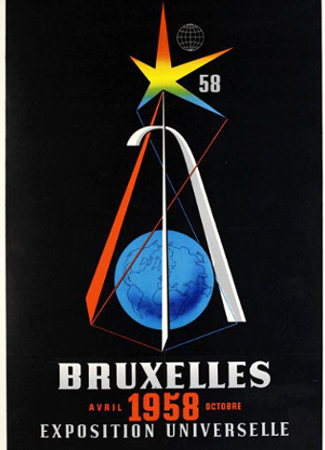 Site Acreage - 200 hectares (494 acres). The exhibition occupied the 1935 World's Fair site on Heysel Plateau, but was fifty percent larger with the addition of Royal Park of Laeken. 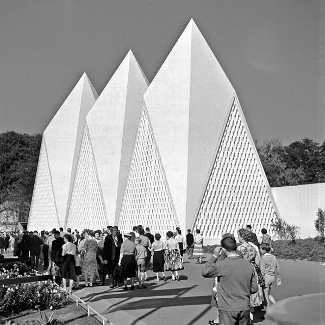 Expo '58 was a Universal style fair sanctioned by the Bureau of International Exhibitions. It was essentially the first fair held after World War II, and despite a change in the characters who brought tension to the site (in Paris 1937, it had been Germany versus the Soviet Union plus the west), this exposition saw a standoff, in many ways, of the cultures that were emerging in the 1950's. Those of communism versus capitalism. This time it was the affluence of 1950's United States against the socialism of the Soviet Union in true cold world style. The United States had been slow to exhibit due to the cost of the Korean War, but when they found out about the plans for a large Soviet presence, reported $60 million touting their Sputnik success, they quickly made plans.

The exposition heralded the atomic age and was mainly focused on science, including the first public demonstration of nuclear fission. It was arranged in three main sections; Belgian, Belgian Colonial, and Foreign with an additional amusement section. International organizations such as the United Nations also exhibited. There were unique exhibits both inside and out of the pavilions. On the main avenue leading to the Atomium, there was a Water Ladder, which gave the look of water running up hill. Multi-national corporations also made a splash; Disney Circarama was a preview of multi-screen and slide film techniques. Other United States firms also exhibited; Coca-Cola, Eastman Kodak, IBM, Philip Morris Overseas, Westinghouse, Singer Sewing Machine, and Pan-American World Airways. 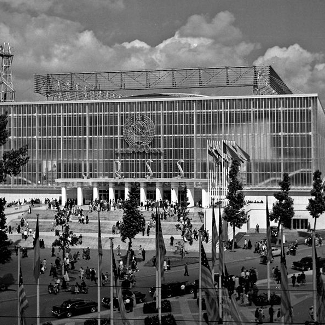 The idea of hosting a fair, post German occupation, was bantered about for ten years. Finally, a semi-public organization was formed and the fair planned. It would be held in Heysel Park, site of the 1935 fair, four miles from the center of Brussels. There would be a theme structure, the Atomium, still there, that was three hundred and sixty feet high, built in nine molecule style to keep up with the theme. The base sphere and four others were used to present an exhibition on theme of peaceful use of nuclear physics. At the top, there was a restaurant. All told, the Atomium stole the show.

But in the area of its unintentional sub-theme, the contrast between capitalim versus communism, was where the United States pavilion shone. Thirty million visitors saw its display of the American lifestyle.

The expo was considered a success by most, with a reported profit and establishment of Belgium back on the world stage. 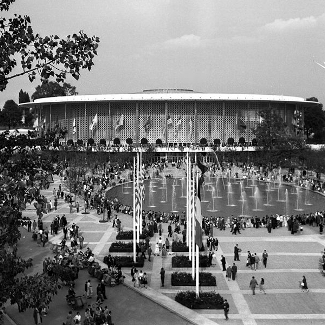 78 nations were invited to participate.

There was a Belgian Village from 1900 in the amusement section with one hundred and fifty houses on 5 hectares.

Legacies
The Atomium.
As of 1997,the United States pavilion was still being used as Flemish TV studio in Van Leuyens Park. 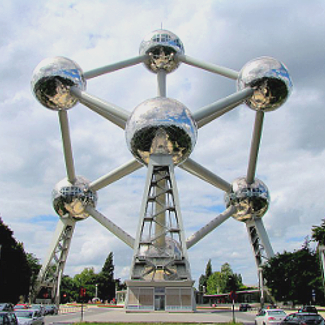 Organizers for the fair were a semi-public organization with a large contribution from the Belgian government as financing. Charles Everarts de Velp was General Secreatary. Baron von Fernig issued the invitation to foreign participants.