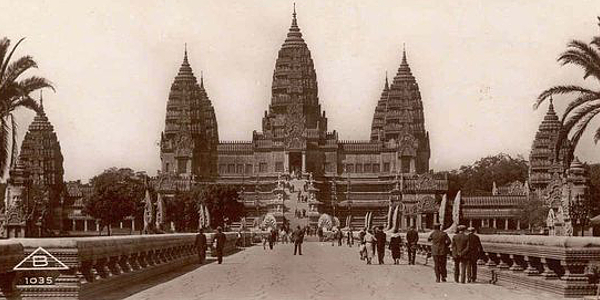 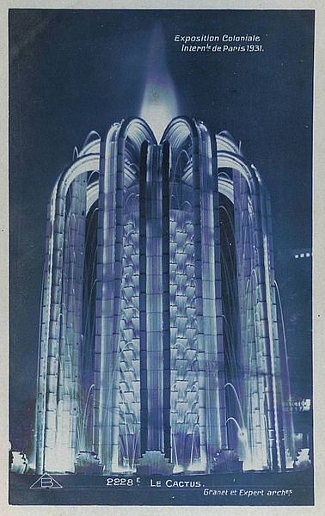 Attendance - 33,489,902 paid attendance with 1 million free tickets. However, on some days, for example, Friday, 4 tickets were needed to get in, so it is difficult to tell what the real attendance was. Some estimates state that only eight million different visitors actually attended.

Site Acreage - Occupied 110 hectares (271.7 acres) of Vincennes and Lake Daumesnil. Other sources state that the entire acreage of the exhibition covered 500 acres.

Sanction and Type - Prior to the Bureau of International Exhibitions. Paris 1931 would be considered a special theme medium scale registered event today.

Ticket Cost - Price of entry fixed at 1 ticket (3 francs) on ordinary days with a special price to be determined on other special days of official reception (in theory Friday). Season tickets, good for 15 days, cost 20 francs ($0.80). Foreign visitors could get special Card of Legitimation, which includes reduced fares on the railway, etc., plus fifteen days entry from the first date for 25 francs ($1.00). 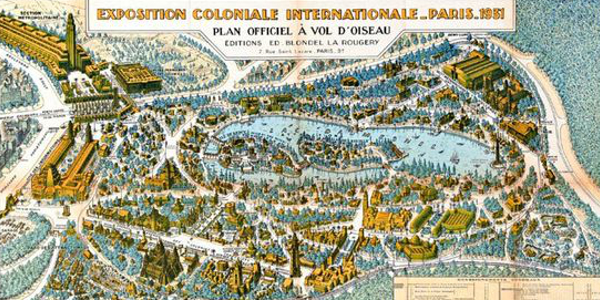 By the time of the Internationale Colonial exposition in Paris, it was fairly easy to see France as a nation holding on. They wished to hold onto their territory in Europe, at constant threat over the past fifty years and in years to come. They wanted to hold onto their colonial possessions, spread all throughout the world. But France was starting to show its wear. In the 19th century through the grand fifth Universelle Exposition in 1900, France exhibited to the world that they were at the forefront of all nations. With the 1925 Decorative Arts Exhibition and now the Exposition Coloniale Internationale, they were becoming a nation focusing on smaller goals and themes. There would be only one more major exposition held in Paris before German troops would march down the Champ de Elysees in World War II. And after that exposition, in 1937, there would be no more world's fairs held in Paris.

Genesis for the idea of a colonial exhibition began in 1912 with a suggestion by the French Minister of Colonies. France was the second largest colonial power at the time behind only Great Britain. Original date of the fair was 1916, but World War I intervened, and before Paris could host a colonial exhibition, the other provinces picked their preferred site, Marsailles, which hosted an exhibition in 1922. But Paris persisted, choosing their location in the Bois de Vincennes. The site also included two islands at Lake Daumesnil and a zoological garden. England did not participate in any significant manner, perhaps due to their recent colonial exhibition in London 1924-5, and neither did Germany. They had larger aims. Yes, those two facts say alot. The United States did participate, first time at a European colonial expo, spending $300,000 for its exhibit and six other buildings, including a replica of Mount Vernon with bedroom set aside for Lafayette, and exhibits from Hawaii, Alaska, the Phillipines, Samoa, Guam, and the Virgin Islands.

Above photo. Fair grounds poster of the Paris Colonial Exposition 1931. Below: Poster of the colonial sections. Original image source unknown, from Pinterest. 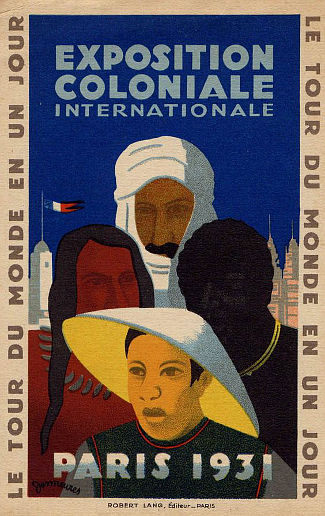 It was a vibrant display of indegenous people in a fantasyland of native villages. Yes, politically incorrect today. And it turned a profit, some 29,000 francs. But the exposition was as much about the expanse of the French colonial power as it was a harbinger for what was to come, an even more pronounced decline after the 1937 exhibition.

Patricia Morton - "The 1931 Exposition was a rare source of pride for France at a time when her economy and international prestige were eroding. By 1931, the Depression had arrived in France, despite the reluctance of French authorities to devalue the franc or enact emergency measures to maintain French economic health. The Exposition was a welcome diversion from growing unemployment and the political unstability of the Third Republic. 33 million tickets to the Exposition were sold, which made it one of the most popular world's fairs in France. (Multiple tickets might be used for a single entry so the 33 million ticket figure does not directly translate into entries.) The French empire was not well known to most French people, but the Exposition sought to demonstrate its extent and grandeur, a lesson wholeheartedly embraced by the French public. Further, the Exposition was an international event, which allowed the French to display the riches of their empire to the foreign participants: Italy, the Netherlands, Portugal, Denmark, and the US."

Johan Lagae - "Paris 1931: new concepts: 1. fair was intended as a means to urbanize a part of Paris, at the outskirts of the city, this was a major intention of Marshal Lyautey, who had proved his interest in urbanism already in Morocco (using urbanism as a political means), but was not carried through. Furthermore, many criticized the fact that the fair was not in the centre of the city; 2. the Paris fair was the event that proved that architecture could be a powerful means of colonial representation, and the formula of 'exotic' pavilions was highly succesful (this was however not completely new, but the Paris fair no doubt was the event that used this approach on an unprecedented scale); 3. Lyautey wanted the fair to be more than an exhibition foraine', and wanted it to be a 'foyer d'enseignement pratique': as such a large building was erected, in which every visitor could receive accurate information (especially interesting for potential investors, industrialists,...). further more, many congresses were held during the event, that as such extended and spread the knowledge on specific colonial topics among a european audience of specialist; 4. the use of artificial lighting was said to be innovative (some earlier experiments had been made in Barcelona 1929 and Antwerp 1930); 5. the section of the Belgian Congo was highly innovative, as for the first time the Congo was presented by means of an architectural design that unmistakably was inspired on the traditional built forms of Central Africa. As such, the design of this section marked a turning point for the representations of the Belgian congo at future expositions. It was very succesfull, and would form the model for the official Congo-pavilion at the Brussels 1935 fair." 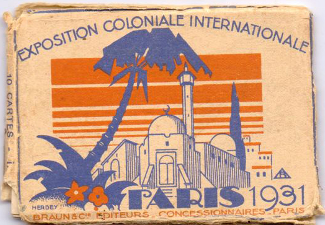 Exposition site in Vincennes, east of Paris, was once the site of a royal castle, and since Napolean III, a public park.

John Philip Sousa wrote "The Legionnaires" at the behest of the French government for International Colonial & Overseas Exposition, but did not perform there.

France suspended its Visa Fee for the exposition with a free stamp given to all foreign visitors during fair period for the first time since World War I. No passport necessary.

Legacies
Gallerie d'Art was a legacy as was the Colonial Museum, later known as the Museum of African and Oceanic Arts. That museum today exhibits ethnographic art with little reference to French colonial history.

Section of the fair that housed display of exotic animals became the basis for a zoo in the park at Vincennes. 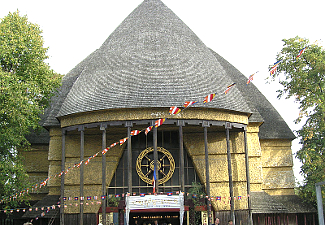