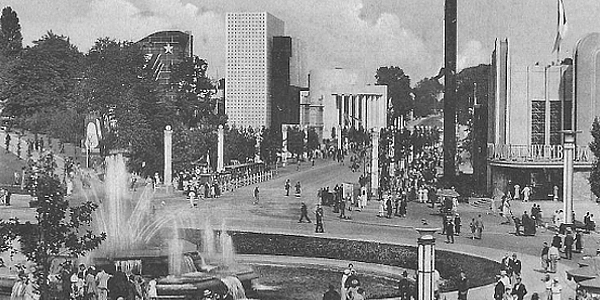 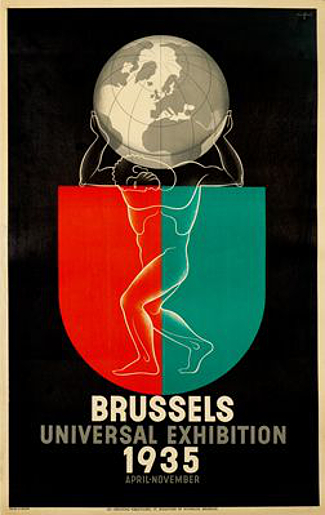 Sanction and Type - Bureau of International Exhibitions General Expo of the 1st Category (Universal). Registered October 27, 1932. Would be considered a Registered Expo with Universal qualities like on the 0 years of each decade today. 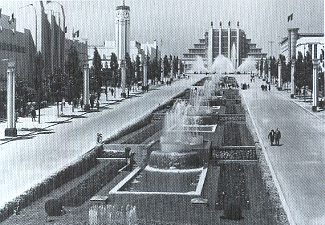 The Bureau of International Expositions was in place as of 1928 and the Brussels fair of 1935 would be its initial sanctioned fair of General Category 1. Of course, at that time, they didn't really know what that meant or if the idea of sanctioned fairs would catch on. And in the decade before depression and World Wars, who knew what was to come. For Brussels, they had hosted international expositions before, in 1897 and 1910. Now, in 1935, they would host the next, a Universal fair in a cosmopolitan city that, like its Paris counterpart, would be overcome with German tanks within the next decade. Perhaps they should have seen that coming, Germany cancelled its space in the international hall in January 1935. Apparently, they had other designs.

But Brussels, despite the economic and political difficulties of the time, would build a remarkable ephemeral city on the Heysel Plateau, three hundred acres of standard block buildings with limited charm, but amazing durability. The 1958 fair would be held on the same site, with an added Atomium; the Centennary Building still remains today. It would be the largest event ever held in Belgium, with permanent structures such as the Grand Palais on a site next to the Park Laeken. The reason for hosting was stated as the 50th anniversary of the founding of the independent state of the Belgian Congo. That was a bit less special than its original purpose if held in 1930 for the 100th anniversary of Belgium, but that fair went to Antwerp and Liege. The 50th of their colonial prize would have to do. 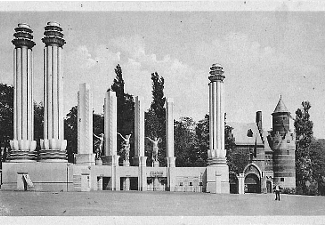 The expo was successful, drawing over twenty million visitors, and it turned a good profit. It's hard to put the success, however, into context, just like it was with Paris two years later. World War II was about to be waged, and some of the permanent buildings of the fair, the Planetarium, for example, would be destroyed in Germany's attack. The Planetarium would be rebuilt on the same spot after the war.


Johan Lagae - "Brussels 1935 promotion of national self-esteem of course was part of this event, however only five years earlier, Antwerp and Liege had benefited from the fact that they were allowed to celebrate the centennial of the Belgian nation. Brussel celebrated the cinquantenaire of Belgian Colonialism (50th birthday of the founding of the Etat Independant du Congo, which was a result of king Leopold II's diplomatic skills, and thus the colonial section always paid tribute to the dynasty) and the centennial of Belgian railways. Promotion of national pride in Brussels by the host country was linked with economical rather than political considerations. However, other nations, Italy in particular, used the Brussels fair as a vehicle to explicitly promote the fascist regime (in a specially designed pavilion)."

"Because of the economic crisis, prior to the opening the initiative was considered by many a waste of money; the Belgian government was not willing to invest large sums in the fair, nor was the Ministry of colonies. The driving forces behind the event were industrials, entrepreneurs, local politicians (the city of Brussels supported the idea from the beginning). In the official press, the event was announced as an 'acte de foi', while in the other press there was skepticism. the organizing comitee made large efforts to promote the fair, and published a well edited and skillfully illustrated Bulletin (52 issues from late 1933 till 1935). Just like in Antwerp 1930, the fair was used as a means to urbanize a part of the city at the outskirts (infrastructure, ...) Further more, it was decided to built also some permanent buildings that would enlarge the city's equipment after the fair. The fair was innovative in its very urban lay-out, in which nearly every nation had its own pavilion (if this again was not completely new, the scale of this approach was unprecedented). At the Brussels fair, ingenious light and sound effects were used in the overall conception of the exhibition ground. What seems to be the most specific innovation at the Brussels fair, is that several nations started to use displaying techniques lent from advertising and commercial architecture: the 'shop window' became a major architectural feature to present oneself (cf. Switzerland, Finland, Chechoslovaka). 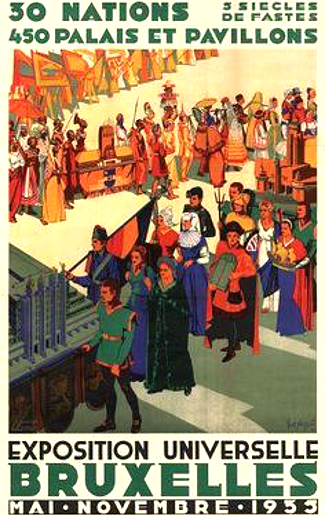 Note: It is sometimes difficult to tell whether certain nations actually participated in a significant way. Newspaper reports as well as the official guidebook or even the Bureau of International Expositions itself may indicate participation when actual participation did not occur, occurred minimally, or miss unofficial participation at all. Take the above as a guide, not gospel.

Theme of fair was an ironic "Peace between the races," both from the perspective of colonial possessions outlving their time and the fact that even amongst the races, war was on the horizon.

For those wanting amusement, the section was larger than Chicago in 1933.

Legacies
After the fair, three palaces were to remain plus the City of Rome pavilion and Alberteum. The Centennary Palace remains, and is used for trade fairs. 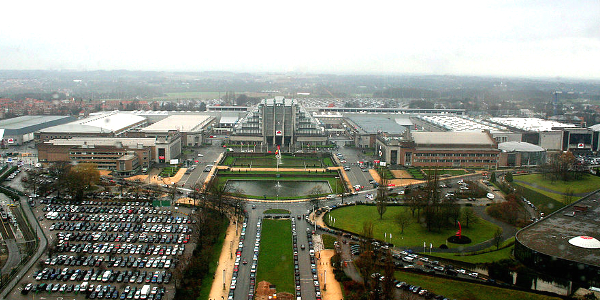