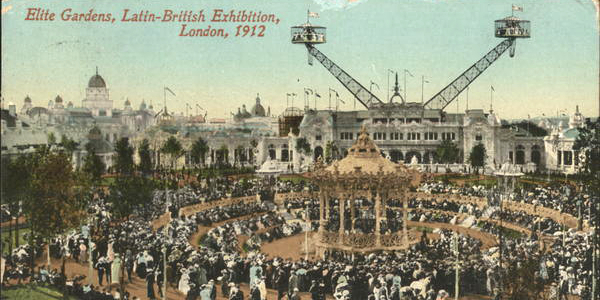 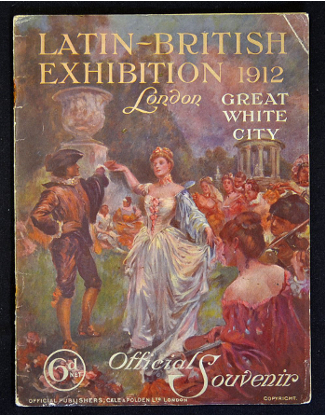 Dates Open - May 25 to October 19, 1912. Likely not open Sundays as per former White City exhibitions.

Attendance - Exact number of visitors not known. Stated that the exhibitions at the White City began to wane in attendance in latter years. Franco-British 1909 drew 8.5 million.

Total Cost - Total Cost not available. The additional cost from the previous years was estimated in some sources as L200,000 for alterations of buildings. 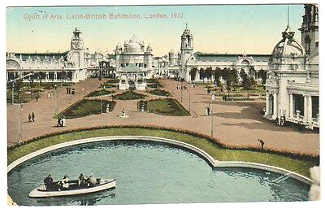 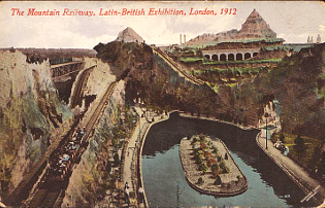 It was the fifth in the series of the White City Exhibitions, after previous exhibitions such as the first Franco-British Exhibition of 1908. The subjects were changed each year and the exhibition was run by a private company headed, once again, by Imre Kiralfy, the master creator of spectaculars and events across the world, and Commissioner-General of the fair. Think P.T. Barnum, albeit not from the United States, but Hungary. The subject of the 1912 exhibition was the nations and cultures of Latin countries, whether that be in Europe, i.e. France, Spain, Italy and Portugal, or South America, i.e. Argentina and Brazil, or elsewhere.

Kiralfy would bring his brand of magic to that area of the world, which pleased the British authorities and merchant class, wanting to expand trade to South America and other Latin environs. At noon on Saturday, March 25, 1912, on the Imperial Tower Terrace, the opening ceremony began the festivities with Princess Alexander of Teck, granddaughter of Queen Victoria, on the dais, accompanied by Prince Alexander. In attendance were the ambassadors from Spain and Italy, and ministers from Portugal, Columbia, Peru, Chile, Bolivia, Switzerland, Belgium, Sweden and Norway, plus a member of the French embassy staff.

There were reproductions of the cities of Rome, Naples, Venice, Florence, Granada, Toledo, as well as sites in Britain plus native villages from the colonies. The art exhibit was a highlight. While the amusement section was smaller than previous years, it contained popular exhibits such as the Mountain Railway, The House of Troubles, Great Bostock Jungle, Spiral Chute, and the Caves of Laughter. The Flip Flap was back, reconstructed at a cost of L1,400. There were electric trams carrying visitors around the grounds for the first time and there was an ice skating rink inside one of the palaces. 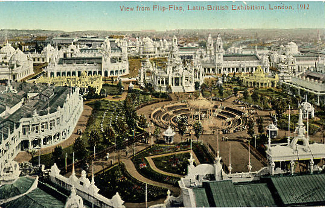 How successful was the fifth White City exhibition? Less so, it seems, than the others, although there were reports of large crowds on opening day. Kiralfy paid less money for the license, L1,400, than in other years, so it seemed the authorities knew what they would be getting. The London Times ran many articles about the event, showing that its import was still high, even though perhaps less than in the Franco-British Exhibition days four years earlier. 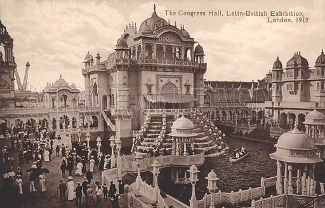 Other amusements included "The Street of Adventure," which contained a sideshow

The central pavilion in the Elite Gardens was decorated in red and gold. There were approximately one hundred and twenty buildings and pavilions for exhibitors and merchants.

Over one thousand French firms sent exhibits, including display of Paris fashions, although France exhibit was delayed by a dock strike.

Legacies
Imre Kiralfy and Prince Alexander gave a L,5000 check from the Latin-British Exhibition to the King Edward Memorial Fund.

The White City site was used again for an exhibition in 1914, the Anglo-British. That ended with World War I when the site was used to train troops. White City Stadium lasted until 1985 when it was demolished. One of the largest shopping centers in Europe, Westfield London, now occupies much of the former site as of 2008 and caused the demolition of the two remaining exhibition era structures. 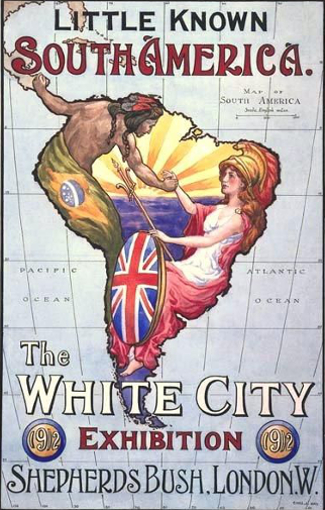