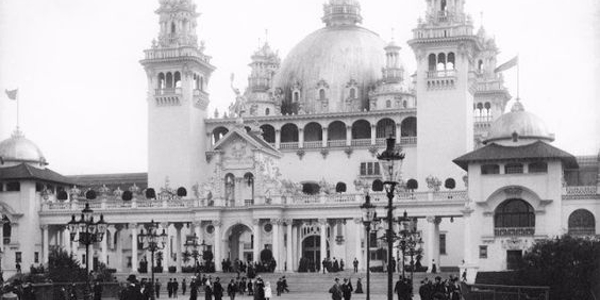 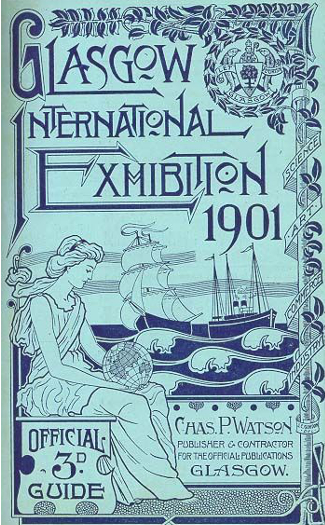 Sanction and Type - Prior to the Bureau of International Expositions. Would be considered a Recognized Expo with Special qualities like on the 2-3,7-8 years of each decade today. 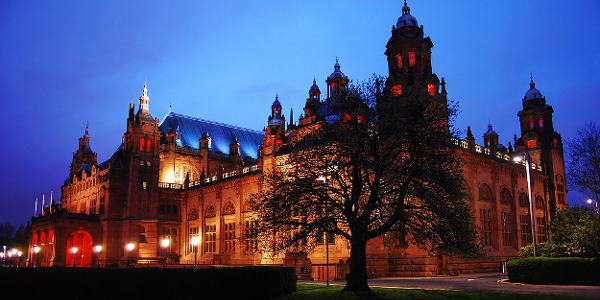 Second time around for Glasgow and this time to celebrate the 50th anniversary of the first international exhibition in London's Hyde Park in 1851. This fair was proposed in 1897. A permanent structure was built, the Kelvingrove Museum and Art Gallery, using the profits from the 1888 exhibition as its base. It went over budget. A concert hall was built for concerts and the opening ceremony. It held three thousand people. A Russian village was erected and boats plied the Kelvin River. There was a huge Industrial Hall, two hundred thousand square feet large to host the industrial exhibits plus other main buildings, the Concert Hall and the Machinery Hall. Other smaller buildings, Agriculture and Heating and Lighting held exhibits on those topics. Canada, Ireland, Japan, France, and Russia had national pavilions.

But, in many ways, it was a fair that signalled the end of the imperial era. The 1899 Boer War and the death of Queen Victoria earlier in the fair year signalled a change. Understandably, it faired poorly when compared to the massive fair in Paris the year before.

Above photo. Kelvingrove Art Gallery and Museum, built from the profit of the 1888 fair for the 1901 fair, 2007. Courtesy Wikipedia Commons. Below: Russian Restaurant, 1901, original source unknown. Courtesy Pinterest. 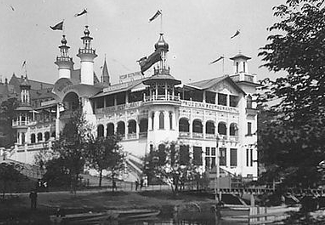 There were more corporate exhibits, a trend that would continue throughout 20th century fairs. Heinz of Pittsburgh exhibited baked beans. There was a fascination with cars, shown beside the carriages they were going to displace. The fireworks were great.

Once again, Glasgow did it right, with a profit of 30,571 L despite initial disappointment when neither King Edward VII or his son chose to open the fair. Edward did not even visit. Instead, Princess Louise, Dutchess of Fife, opened the fair. That was seen as a blow to civic pride. But with good weather, the public poured in. The profit from 1888 built the Kelvingrove Museum and Art Gallery, used in the 1901 fair, which was a large improvement over 1888. The organ from the Concert Hall, restored in 1989, remains in the Museum and Art Gallery.


Stanley Hunter - "1901 The death of Queen Victoria in January meant that the Prince & Princess of Wales (Edward VII & Queen Alexandra) could not open or visit the exhibition. There were minor but disturbing outbreaks of plague and smallpox in 1900 introduced by seamen. These were controlled (compare the 1950 movie "So Long at the Fair" re Paris 1889). At the close of the exhibition, a pavilion was gifted to the nurses of the fever hospital involved. The second Boer War was unresolved. Queen Victoria, who had tentatively agreed in 1897 to open the exhibition, (if spared), died in January 1901. Her son, the Prince of Wales, was then invited to open it, but as the new King Edward VII, he was unable to afford the time. Glasgow claimed the title (unchallenged) of "Second City of the Empire."

Fred Goldsmith - "The first and second Glasgow Exhibitions, although 'locally' organised, the organisors included captains of industries with international links and interests - banking, ship building, engineering, etc. Furthermore, foreign representation at national government level (e.g. Russia and Canada, France, Persia and so on) as well as manufacturers from Holland, France, Germany etc.. This gave a signal that the 'world' was included, even if the site was relatively small. In the context of exhibitions in Paris and London. as well as the United States (Sousa played at the 1901 Expo) in the years 'round about', Glasgow had no doubt about its place in the international hierarchy and was nationally proud. 1901 was literally 'son of 1888'. With just over twelve years between the two, many of the organisers were the same and lessons had been learned!" 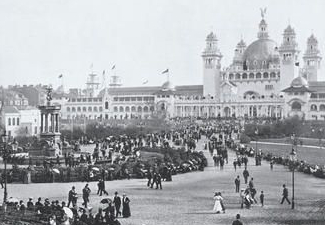 Note: It is sometimes difficult to tell whether certain nations actually participated in a significant way, either officially or unofficially. Newspaper reports as well as official publications may indicate participation when actual participation did not occur, occurred minimally, or miss unofficial participation at all. Take the above as a guide, not gospel.

Electrified tram system carried people to and from gates.

Quaint building by soap manufacturer Lever Brothers for employees was replica of a pair of cottages. They still stand.

Royal Bungalow Restaurant was regarded as the best place to eat. McKillop again had sole contract to sell alchohol, and ran the Royal Bungalow and high-class Grosvenor near the Concert Hall, and the Grand Avenue Buffet. Jenkins & Company ran lower-class Place Restaurant and tea-rooms. Large Prince's Restaurant was located on the highest ground of Exhibition.

Concessionaires and amusements did well, but the fair could have used more. The Switchback had 1,111,000 passengers and the water chute 651,000. 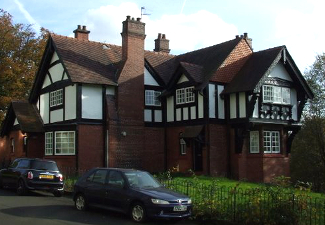