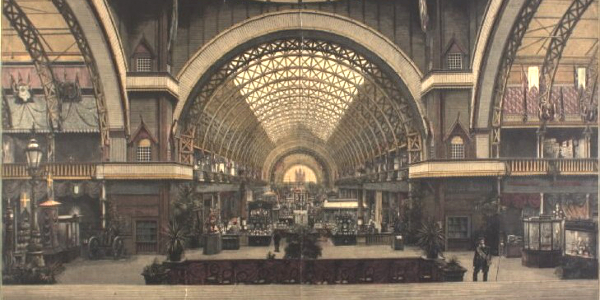 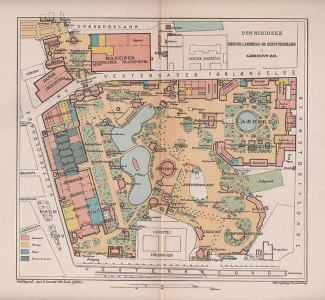 Site Acreage - Larger acreage than 1872 exhibition; 40 tdr. listed in article based on official report, unknown what tdr. stands for.

Sanction and Type - Prior to the Bureau of International Exhibitions. Copenhagen 1888 would be considered a Special Expo event on specific themes like that on the 2-3 or 7-8 years of a decade cycle. 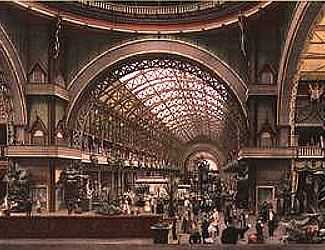 
History of the Event 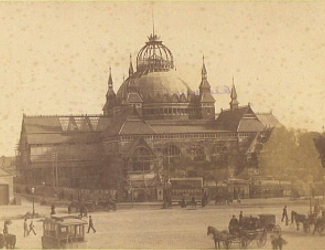 Sixteen years after the first Scandinavian Exhibition of international character in Copenhagen, the city, state, and private organizations held a second, this time called the Scandinavian Art, Industrial, and Agricultural Exhibition in 1888. It was held on a larger site with bigger Great Hall, which was wooden, exhibits from 6,082 exhibitors, 4,121 of them Danish. Twenty-nine institutions and organizations, both public and private, organized the event, primed by the 1883 idea to host by Philip Schou, manager of the Royal Copenhagen ceramics factory, and chairman of the Association of Copenhagen Industrialists.

An economic success again, Copenhagen's 2nd international event opened with the King, Queen, and Prime Minister in attendance on May 18, this time its grounds extending into and using Tivoli Gardens as part of the exhibition. Land along the sea was also used for cattle shows. The viewshed included a gigantic twenty-six meter high beer bottle by Tuborg Brewery, a functioning dairy exhibit, and electric lights shining in Tivoli Gardens. The public thought it all grand, chasing through the exhibition at a much higher rate than in 1872, doubling the attendance. And that, to some degree, was a good surprise, as competition for world's fairs in 1888 was at its height; Barcelona, Brussels, Glasgow, Cincinnati, and later in the year Melbourne were also holding events. Foreign press did not note positive remarks either. The New York Times stated that few knew that the event existed, even one week before opening. Letters to the editor in the London Times remarked that as far as the English exhibits "neglect reigns supreme."

Buildings at the fair included the main exhibition building with its fifty-six meter high dome. It included exhibits on the industrial arts. Agriculture, Hygiene, Housekeeping, and Machinery had their own buildings. There was an Administration Building, Horticulture Pavilion, and private pavilions for Juncker-Jensen's Photography, Galle and Jessen Chocolate, Marstrands Bakery, the Nuremberg House, and others.

Success per attendance was, as noted, more than double that of 1872, with the exhibition committee gaining DKK 1.5 million from entrance tickets alone. 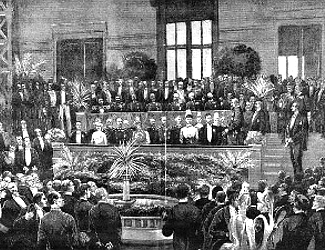 Margit Mogenson - "In 1888 did also the agriculture circles participate and that accentuated National Pride. In 1888 and before the opening was established a new and close cooperation between circles that usually did not work together for political reasons. In my opinion this exhibition brought city and countryside together - at least for a while. 1888 included a wide area for modern sports, cattle shows and electric lights in the entertainment park. "Tivoli" (part of the exhibition area then). The exhibition introduced in Denmark a great and for its time modern historical section (cf. world exhibitions since 1867), first of all for celebration of the 200 year jubilee for the freedom of peasants (stavnsbandsloningen, in Danish).

(Theme) Copenhagen prospered by both (1872 & 1888) exhibitions, partly because of the themes (industry, progress, history etc.), partly by new buildings and gardens and the fact that the city became familiar with such partly international events. Sponsoring by the Danish State and the great private associations. It was in those days rather easy to get money for national and nordic exhibitions. Much more difficult for international purposes." 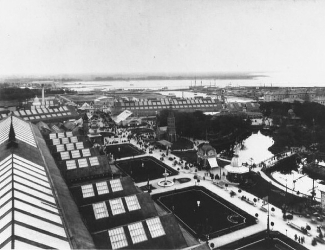 There may be some differences in the overall list here than were actually exhibiting at the exhibition. Various sources may indicate participation when participation did not occur. Use the above as a guide, not gospel.

Expo Tidbits
Russia had its own pavilion.

Writing ball instrument from Malling Hansen exhibited again (seven examples) with August Lyngbye getting a First Prize mdeal in silver for its latest version. Another winner at the fair was Carlsberg brewery, who won a silver medal. Medals were handed out on July 19, 1888 to 1,808 exhibits (silver, bronze, and honorable mention).

Some publications, both current and past, refer to this exhibition as the Nordic Industrial, Agricultural and Art Exhibition in Copenhagen in 1888. 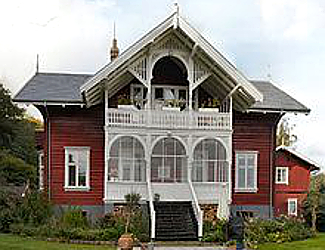 Architect Martin Nyrop. Exhibition Secretary was Camillus Nyrop, who wrote the official report of the fair in 1890.