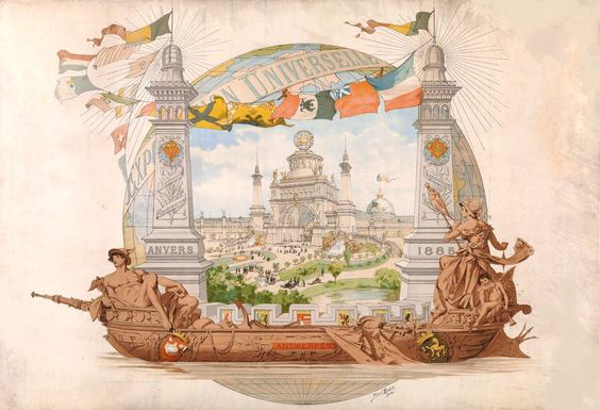 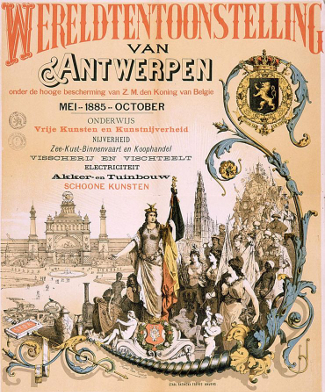 Site Acreage - 54.3 acres along the Escaut River in the proximity of Gare du Sud.

Sanction and Type - Prior to the Bureau of International Exhibitions. Would be considered a Recognized Expo like those on the 2-3 or 7-8 years of a decade, due to size, but with some Universal qualities. 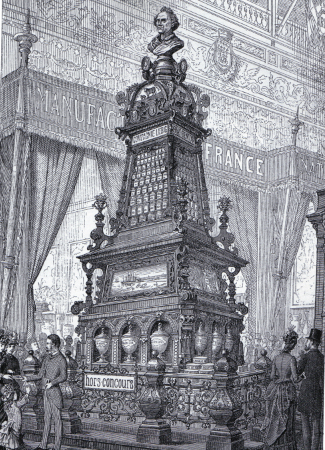 The first three decades of World's Fairs since the first in London's Hyde Park in 1851 had been dominated by the capital cities of London and Paris, but by the end of the third decade and into the fourth, the roster of host cities was expanded, not only to European capitals, but other cities that wanted to test their international qualifications. Antwerp in 1885 would begin that test for Belgium, one it would continue to test with fairs in 1894 and 1930. Centuries before, Antwerp had been a city of world stature, and the upper class of the city wanted to prove that again. For the merchants, they wanted to promote the harbor, colonial trade, and Belgian industry.

Talk about a fair in Antwerp started with London, but gained specific steam at the Amsterdam fair of 1883. They chose a site, the Zuid, where a 16th century citadel had stood. On January 21, 1884, the exposition authority was founded. The event would be a private enterprise, although the nation of Belgium organized the Belgium section and the Royals added their support.

It was an exposition on maritime, industrial, commercial, and artistic topics with exhibits spread around several buildings. The main building, with its impressive facade, rose sixty-six meters in height. It opened on May 2, 1885 with Leopold II and Queen Marie-Henriette in attendance and twenty-six nations taking part. No, not all of the buildings were completed by opening day, a tradition both before and after this event. Some contend it was only about Belgium, France, and their colonies, plus the manufacturers of Germany, but it was in reality a whole lot more. Antwerp was undergoing change in 1885 far past the exposition. The harbor was extended, the Scheldt straightened, causing the old town center to disappear beneath the river, replaced by brooks and docks.

Above photo. Illustration of the Leibig monument at the Antwerp exhibition. Courtesy The Panoramic Dream: Antwerp and the World Exhibitions. Below: Advertising card for the Leibig exhibit at the fair, 1885, Leibig. Courtesy Pinterest. 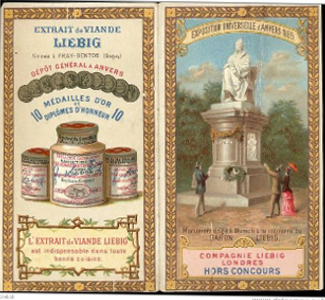 The highlight of the fair was the Hall of Machinery, where many participants from private companies exhibited. The Hall of Industry also provided extensive exhibit space. One of the favorite exhibits was the telephone where visitors could listen to a concert in Brussels. The gardens included tasting stands. Sixty percent of the foreign participation was official.

Some sources say the Antwerp fair broke even; others, such as the London Times at the time stated that it made a 1 million franc profit. Who knows? World's fair accounting is notoriously replete with odd gamesmanship, depending on who paid for what. But it doesn't matter. The Antwerp fair would start a tradition of Belgian events that would reach far into the next century, to the first major fair after World War II at Brussels in 1958, and before that, the first Bureau of International Expositions sanctioned event at Brussels 1935. They were supported by the local population who bought 15,229 season tickets, eight percent of Antwerp's population. The average season ticket holder went to the fair one hundred times. What happened in Antwerp after the fair? Population grew from 225,000 in 1880 to 304,000 in 1890 to 373,000 in 1900 and to 445,000 by 1910.


Peter Scholliers - "Antwerp 1885 was the very first international expo. ... proved that a small country was taken seriously by the giants France, Germany and Britain. Antwerp 1885 and 1894 put Antwerp (and Belgium) firmly onto the international map, with many references to Antwerp's Golden Age ("Old Belgium", e.g.). Antwerp is a major port, and there were railway connections with Holland, France, and Germany." 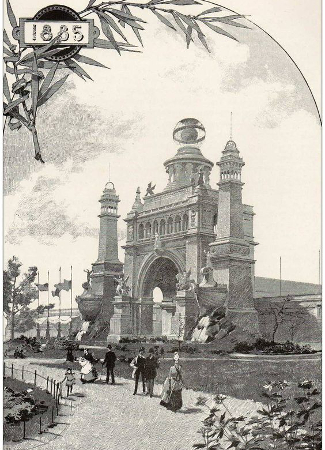 Note: It is sometimes difficult to tell whether certain nations actually participated in a significant way. Newspaper reports as well as the official documents or secondary sources or even the Bureau of International Expositions itself may indicate participation when actual participation did not occur or occurred minimally. Take the above as a guide, not gospel.

The 1885 fair organized concerts and enchanting garden illuminations in support of the exhibition.

Two hundred rooms in The Grand Hotel opened especially for the exhibition. It had a restaurant in the exhibition garden, which promoted the hotel.

Cottage style in gardens had architecturally innovative buildings, including the seaside recreation themes noted in the pavilions of Thomas Cook and Son and Deis Freres.

There was a self-acting tramway which ran the cars of the different systems along the Boulevard des Arts artery between the terminus and the exhibition.

Legacies
Grounds of new Zuid where exposition stood were retained and reconstructed into their original lot plans after the exposition held on a trapezoid site between Volksplein, Troonplaats, Zuidlaan and Gillisplaats was over. Major part of the gardens are still there now with Hall of Industry, Art and Trade, built after the fair in 1887. It is located where the Feestpaleis was.